She may be out in the city.

But Bella Hadid rocked outerwear fit for hunting in the wilderness.

The 24-year-old model sported a fur-lined RealTree camouflage patterned jacket while out and about in New York City on Thursday afternoon.

Bella was not alone on the outing as she met up fellow model and gal pal Kendall Jenner for an   outdoor lunch at Bubby’s in the trendy Tribeca neighborhood. 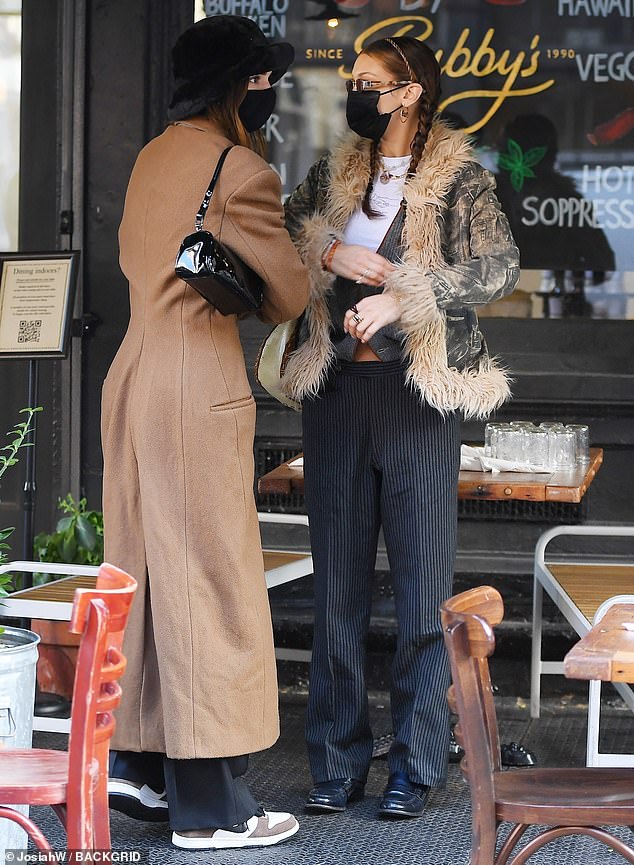 Heading off: Bella Hadid says goodbye to Kendall Jenner before taking a walk after they met up for lunch in New York City on Thursday

She wore the hunt ready piece of outerwear with a grey button-up cardigan and a white shirt underneath, which she complemented off with a set of dark pinstripe pants over a pair of black leather shoes.

The 24-year-old supermodel accessorized with a small pair of sunglasses and a leather purse.

Jenner, 25, kept it a bit more toned down as she wore a long brown coat over a white turtleneck sweater and black pants, which she paired with a set of Nike sneakers and a black bucket hat; she also carried a small black purse for her belongings.

Both of the social media personalities kept their face masks on for the duration of the outing. 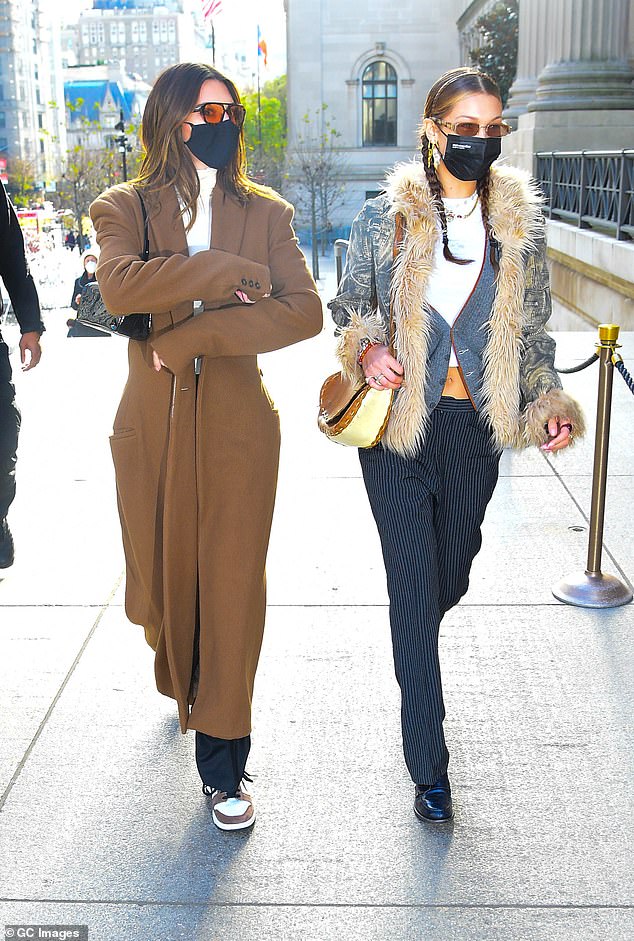 Besties: The 24-year-old model sported a fur-lined RealTree camouflage patterned jacket while out and about in New York City on Thursday afternoon with Kendall Jenner 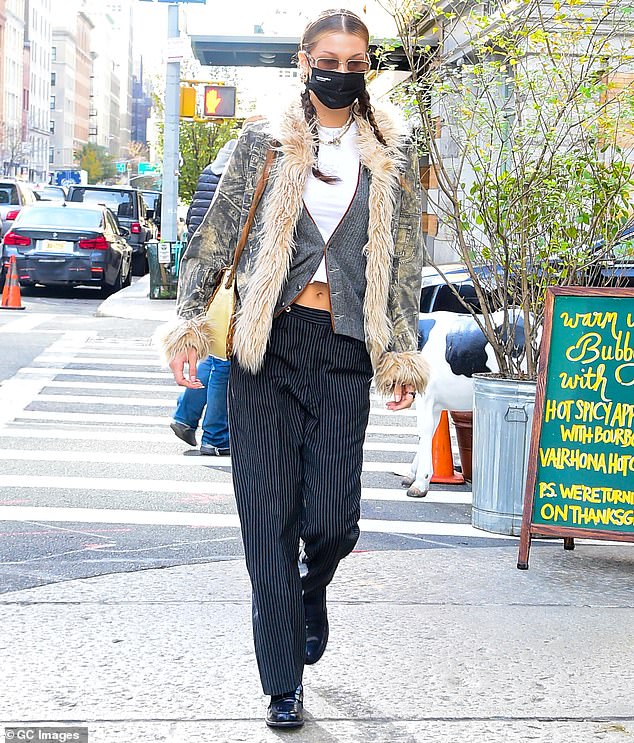 Layering up: She wore the hunt ready piece of outerwear with a grey button-up cardigan and a white shirt underneath Just the two of us: Kendall stayed cozy in a camel colored duster paired with matching Nikes

After the two left each other’s company, Hadid went for a walk through the streets of Soho, where she used the opportunity to show the cameras some of her personal style.

Hadid, 24, has been keeping busy recently, as she was featured in the campaign for the Heaven line by Marc Jacobs, which is inspired by the teen culture of the early 2000’s.

The collection is also a reflection of the period of time that Jacobs maintained a store at Bleeker and 11th street in NYC.

In one of the photos, the model is seen wearing a blue button-up shirt with a matching pair of cargo pants, which she contrasts with a bright orange t-shirt underneath; she accessorized with one of the new purses from the line. 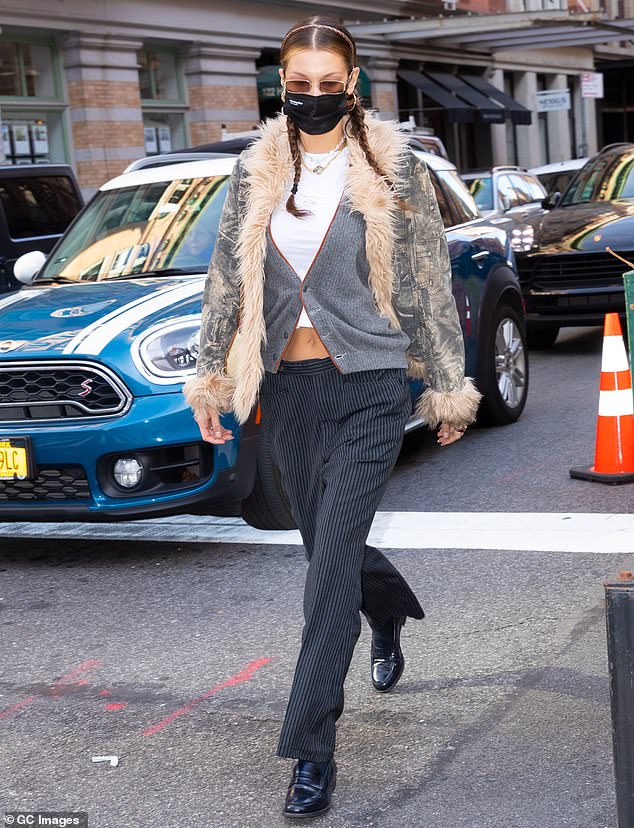 Staying safe: The model kept her face mask on for the length of her walk 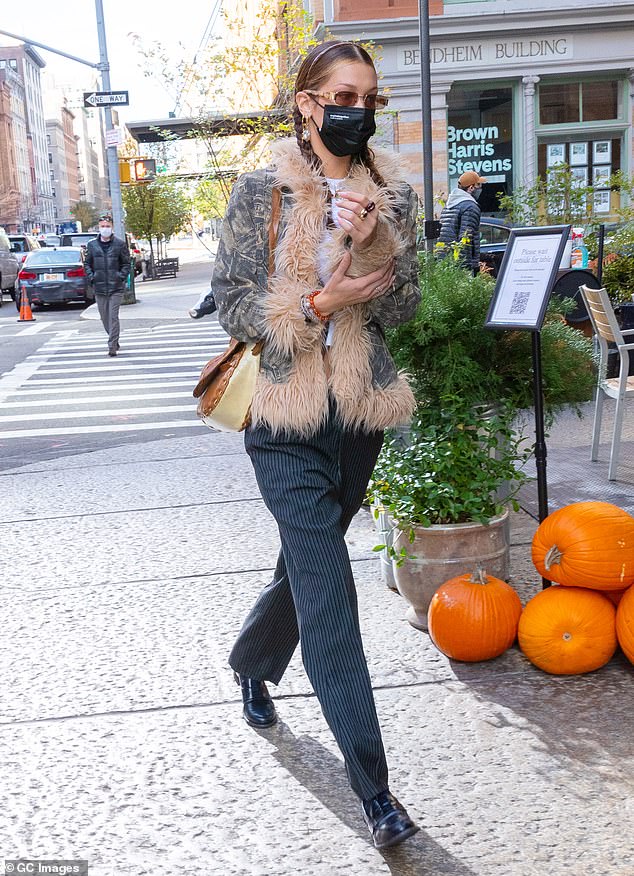 Accessorizing well: Hadid wore an assortment of rings and bracelets to complement her outfit 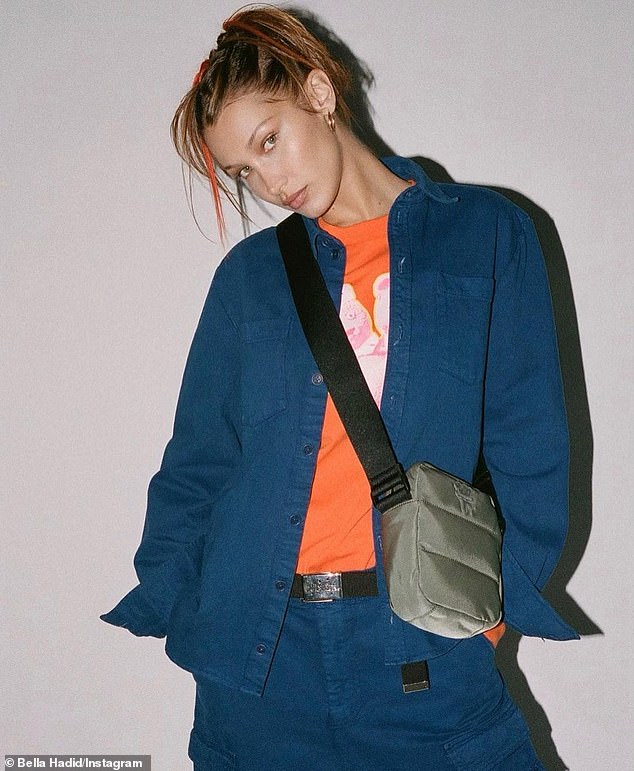 In another photo, she is pictured with striking blue highlights cutting through her normally flowing brown hair as she shows off another one of the new line’s bags.

Hadid posted both of the pictures to her Instagram page and thanked Marc Jacobs for having her feature in the campaign, writing in the caption for the photo set, ‘we love you megatime.’

Jacobs responded: ‘THANK YOU DEAR BELLA!! I love you.’ 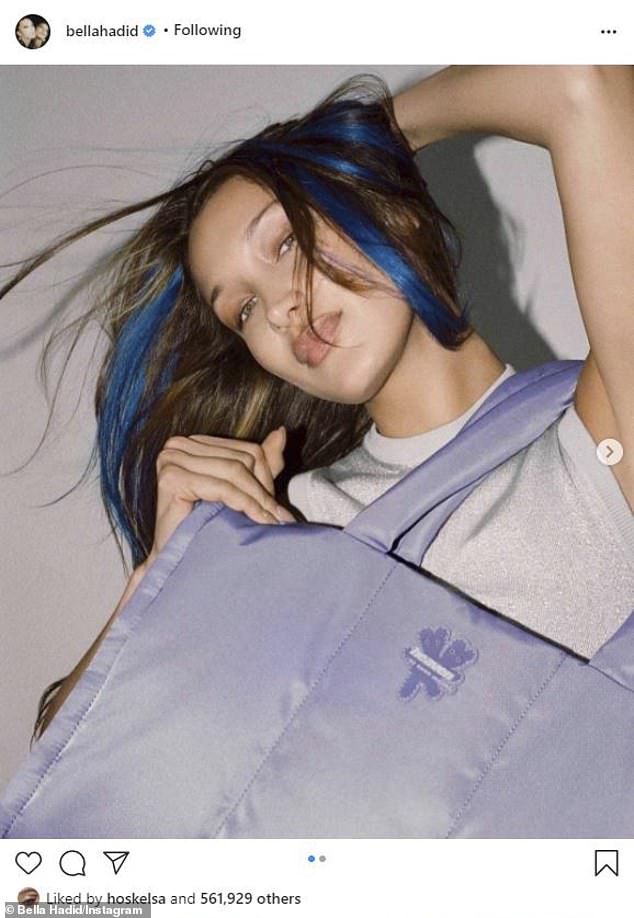