A British woman has revealed she spent five years adopting boy, 6, she met in a Ugandan orphanage on her gap year, aged 22 – as her shy son wins legions of fans online after taking a nap on the This Morning sofa.

Emilie Larter, 29, a primary school teacher, who lives in Worcestershire with her adopted son Adam, six, appeared on the ITV show today and told how she flew to Uganda to volunteer in 2014.

However, just days into her trip she started caring for a five-day old baby called Adam, whose mother had sadly passed following his birth. After immediately falling in love with him, Emilie began the painstaking process of adopting him and bringing him back to the UK.

And it wasn’t long before viewers fell in love with shy Adam too, who was seen hiding behind a pillow and resting his eyes.

‘Adam lounging around on the sofas is what we all need right now,’ joked one, while a second penned: ‘Make yourself at home Adam.’ 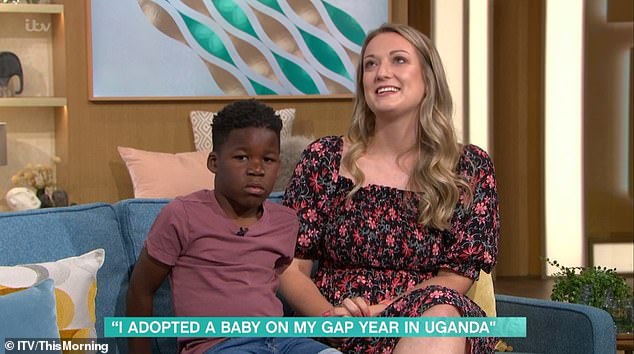 Emilie Larter, 29, a primary school teacher, who lives in Worcestershire, has told how she fought for five years to adopt a Ugandan child that was placed in her arms at just two days old when she was working in an orphanage on her gap year. Pictured, with son Adam on This Morning 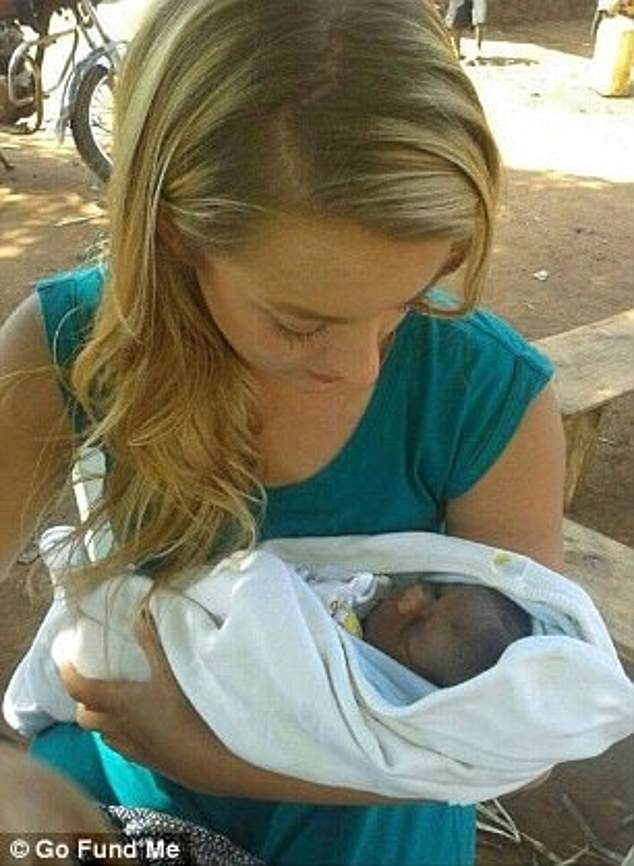 In 2014, just days into her trip, Emilie started caring for a five-day old baby called Adam, whose mother had sadly passed following his birth (pictured)

A third added: ‘Adam is how I feel every Friday tbh,’ while a fourth commented: ‘I just want to give Adam a pillow and a blanket so he can snuggle up.’

Taking presenters Dermot O’Leary and Alison Hammond back to 2014 when she decided to volunteer in Uganda, Emilie explained: ‘I’d been travelling lots before then and when I went there it was the start of many planned travels. A few weeks in, I was volunteering for an orphanage, which I wouldn’t necessarily do again now, but I wasn’t very aware of the negatives back then.

‘A few weeks in we were called to go and collect a baby boy whose mum had unfortunately passed away and it was this one.’

Expanding on why she wouldn’t necessarily volunteer again, Emilie said: ‘I don’t regret it at all, obviously it’s brought me here, but I’ve just seen how it negatively impacts the children – volunteers coming and going.’

Alison went on to ask whether they just had an instant bond straight away.

‘I did,’ said Emilie. ‘At the time, the charity director said can you be his one-to-one carer because there’s lot of children at the orphanage and as a newborn baby he needed a lot more intense care. I agreed and very quickly became attached.’

Emilie, was 22-years-old at the time, while Adam was just five days. 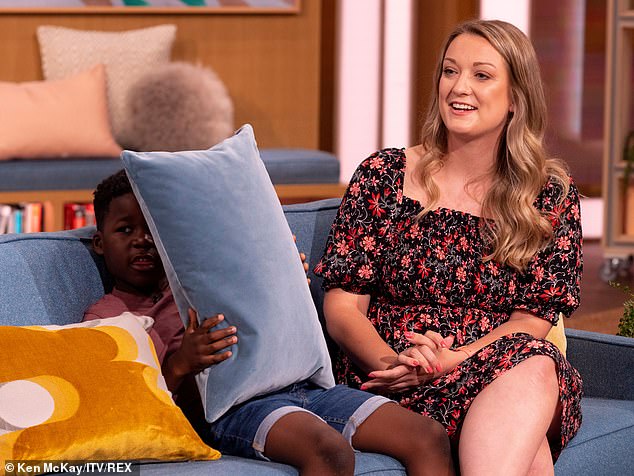 At one point, Adam hid behind a pillow (pictured), leading Dermot to joke that mummy was embarrassing him 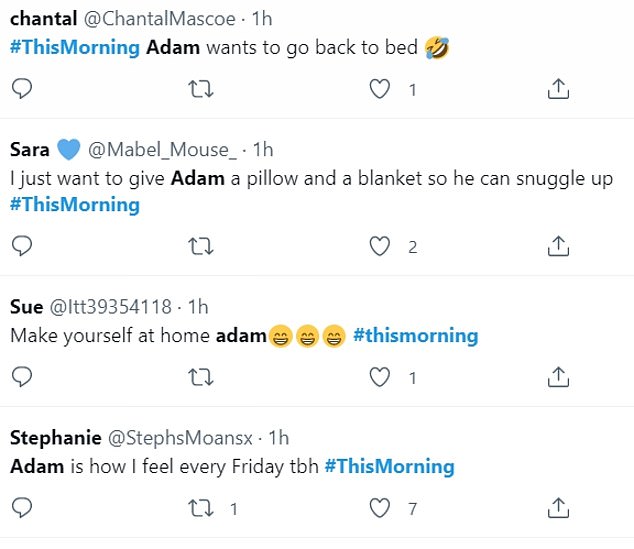 When Dermot asked if she had any idea what to do, Emilie replied: ‘I think it came quite instinctively. I’m quite maternal anyway. If I didn’t know, I asked. I’d call my mum, the charity director also had a baby a few months older so I was definitely thrown in the deep end but I just went with it.’

Emilie was supposed to be there for two months, but extended her stay to about seven-and-a-half months. After that time, she had to come back to the UK.

‘I had no money,’ she said. ‘I didn’t feel like I could volunteer forever. I just had to. So I moved back to the UK but I very quickly got as many jobs as possible and I was going out on visits to see Adam as often as I could.’

Speaking of the adoption process, Emilie said: ‘Everyone has a very different experience out there – mine was particularly unlucky. I moved out to adopt him just before he turned two. 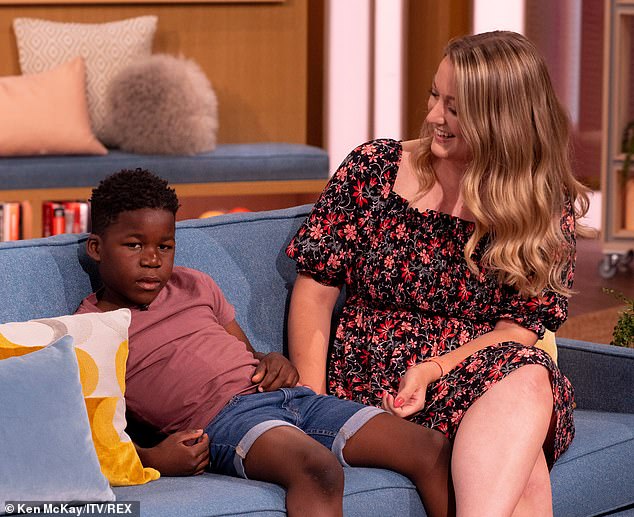 Emilie said she and Adam had an instant bond straight away. Pictured together on This Morning today 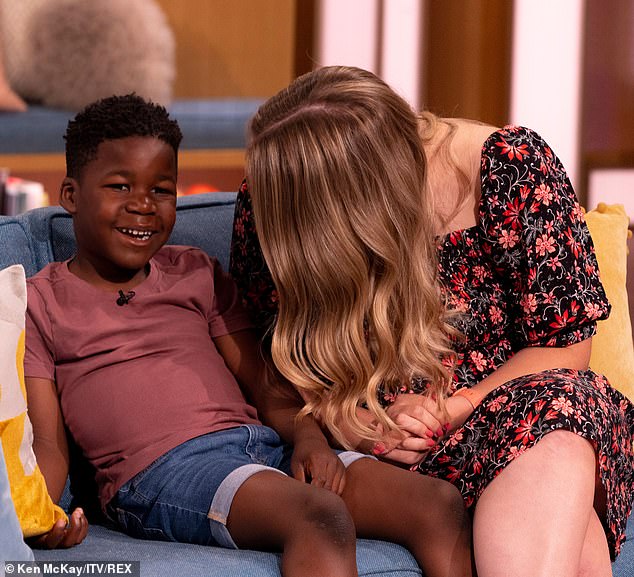 Emilie explained the adoption process in Uganda ended up taking three years and they were there four-and-a-half years in total before they came back. Pictured, with Adam

‘You have to foster for a year before you can apply to adopt, but for us, something went wrong constantly – whether it was paper work went missing, court dates were cancelled, paper work had names misspelt – it was just one thing after another.

The adoption process in Uganda ended up taking three years and then we were there four-and-a-half years in total before we came back.

She continued: ‘The whole thing was difficult and then Covid hit. The day we had his appointment to get his passport there was a lockdown and everything closed. So that just added more delays.’

Emilie recalled the moment she and Adam landed in Birmingham airport and her parents – who Adam had been chatting to for years but had never met in person – came to pick them up.

‘It was emotional but I’d also been imagining it for so many years, but it was weird for it to actually be happening. He gets on really well with them.’

Host Dermot O’Leary explained tha in terms of the process that now he’s hear, Emilie almost needs to start the process all over again. 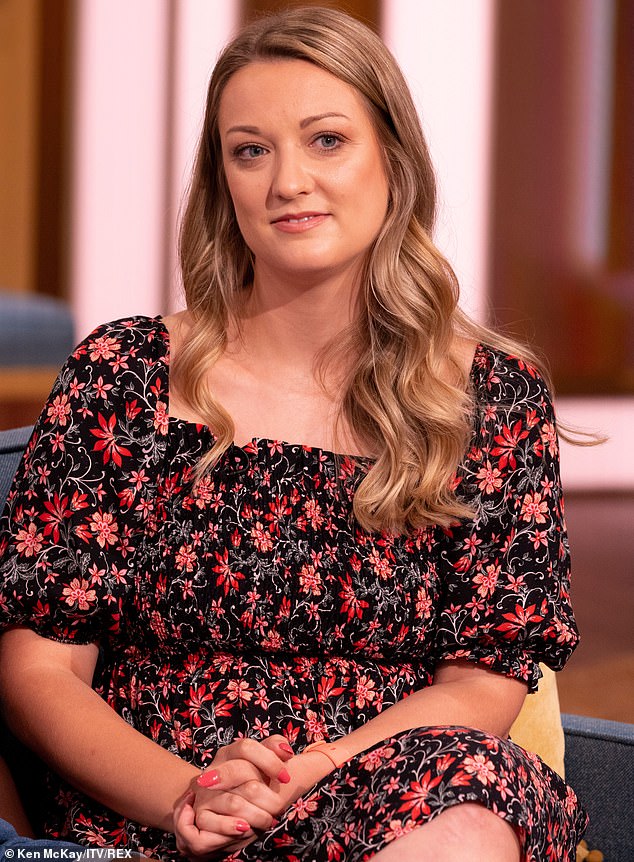 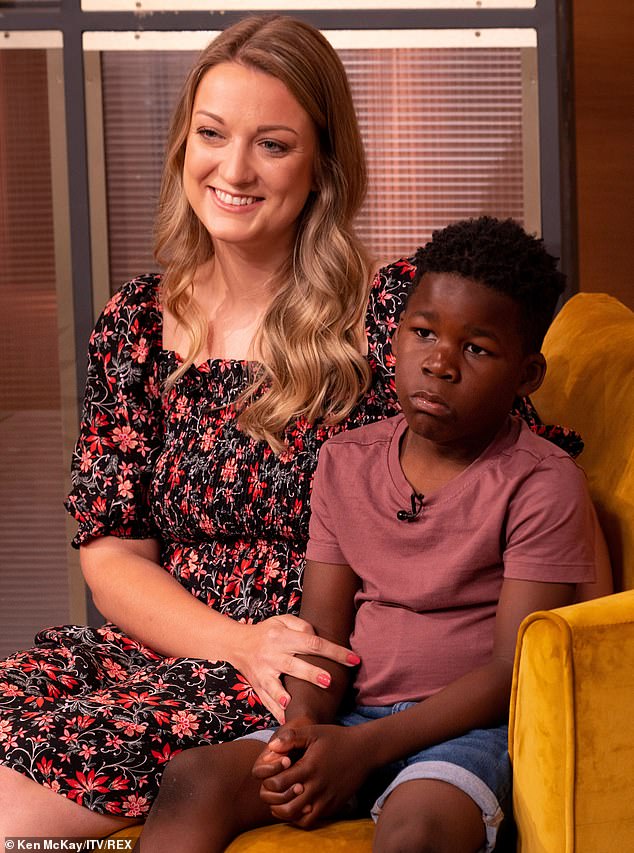 When asked what his mum was like, shy Adam (pictured), who hid behind a pillow, said: ‘I like sleeping with my mummy’

‘I do,’ she explained. ‘Even though he’s here on a Visa, he’s got a Visa to stay here, he can go to school, use health care, everything, I’m not legally recognised as his mum in this country.

‘I’ve got to go through the whole adoption process again. I’ve got social workers on it and things and we’re doing a court application. I’m not as worried though because he’s here with me.’

Emilie set up a Go Fund me page to help her adopt Adam , but she just thought it was going to be friends and family – but then it really kicked off.

‘I’d never actually intended to ask for any money but I’d gone out there, got myself a job in an international school and then I lose it after a few months. Someone suggested I set one up because I didn’t know what I was going to do and I did and it blew up quite a lot.

I’ve got a lot of people following me on social media and things who have helped us and we couldn’t have done it without them.’

When asked what his mum was like, shy Adam, who hid behind a pillow, said: ‘I like sleeping with my mummy.’ 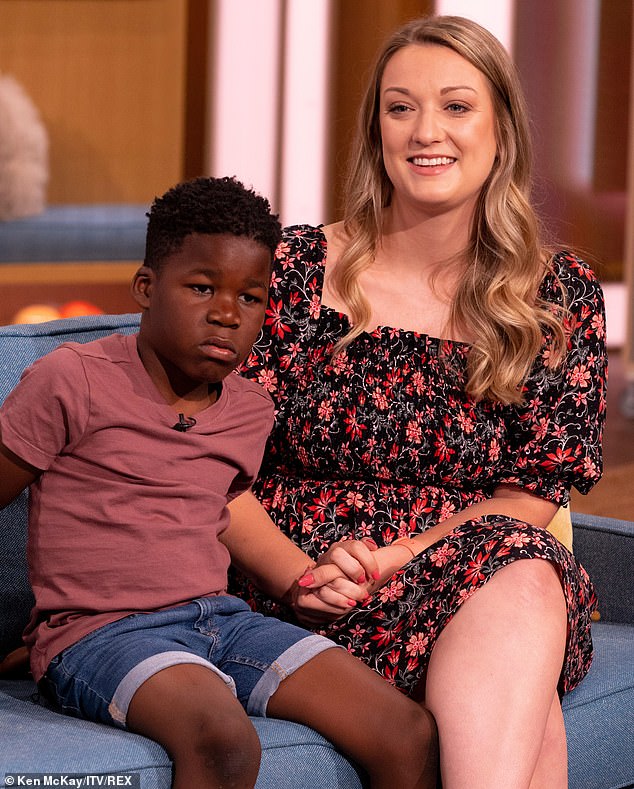 Emilie set up a Go Fund me page to help her adopt Adam (pictured, together) and thought it was going to be friends and family – but it really kicked off