Christine Lampard has revealed the struggles she has faced during pregnancy.

The TV star is expecting her second child in April with husband Frank, making the happy announcement on Instagram last week.

Returning to Loose Women on Tuesday, Christine, 41, discussed her news with her co-stars, admitting being pregnant during a pandemic has had its ups and downs. 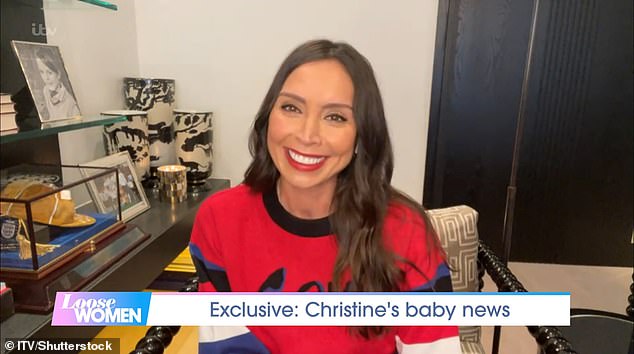 Expecting: Christine Lampard has revealed the struggles she has faced during her second pregnancy. The TV star is expecting her second child in April with husband Frank

The star, who is already mum to daughter Patricia, two, gushed that the impending arrival provided a happy focus both for her and her extended family, especially as she is so far away from her parents back in Northern Ireland.

‘It’s been lovely, a little bit of happiness in our family amidst the bleakness of this year. I have two parents back in Northern Ireland who just cannot wait,’ she said adding that the new restictions enforced over Christmas meant she sadly hasn’t seen her family for months.

‘Christmas was going to be that tiny little bit of light at the end of the year and sadly that didn’t get to happen at all so Mum and Dad haven’t got to touch the bump at all, they haven’t seen it in the flesh.’

‘Thank goodness for Skype and FaceTime and everything else. But it does feel a bit more isolating that your family and friends can’t just put their arms around you, you do miss that contact definitely. It’s been a big, big shift compared to the first time around.’ 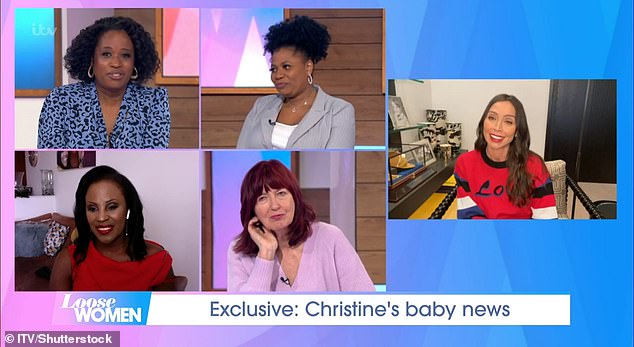 Back on screens: Returning to Loose Women on Tuesday, Christine, 41, discussed her news with her co-stars, admitting being pregnant during a pandemic has had its ups and downs 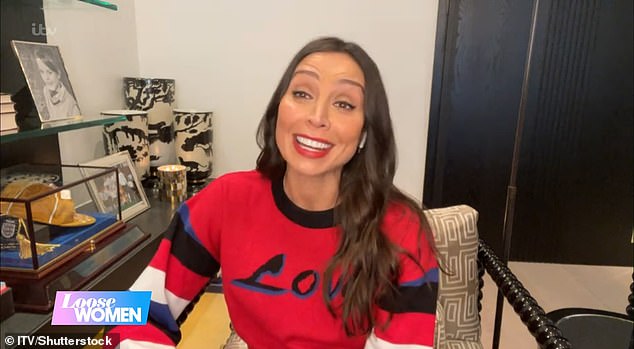 ‘Strange time’: The star, who is already mum to Patricia, two, gushed that the impending arrival provided a happy focus both for her and her extended family but it has been a lonely time

In December 2020 the NHS issued new guidelines for all hospital trusts in England ‘to urgently complete any further action needed so that partners can accompany women to all appointments and throughout birth.’

Three steps have been advised:

1. Undertake a risk assessment in each part of maternity service to identify precisely whether and if so where there is an elevated risk of COVID-19 transmission if support people are present (eg if space prevents social distancing)

2. Make changes to the configuration of space used to provide care and/or how the available space is used to address the issues highlighted in the risk assessment, alongside provision of other appropriate infection prevention and control measures, including training and PPE

3. Use your available testing capacity (eg PCR, rapid PCR testing, or lateral flow testing) to test women and their support people to help mitigate infection risks, in particular for scan appointments, for fetal medicine appointments, at birth, and for parents whose babies require neonatal care. Treat support people who test negative as part of the team supporting the woman

When her co-stars asked if she had any concerns about giving birth during the pandemic, Christine honestly answered:

‘I do, it’s the unknown. You just have to look after yourself as best you can.’

‘Hospital appointments have changed, you can’t bring people with you and stuff, and that’s fine…that’s what you have to do.’

‘I am sort of thinking ahead to April and what will happen at that point, hopefully the world will be a much better place. Ideally, I would like Frank alongside me, I don’t want to do that on my own, and lots of women did have to do that the first time around.’

‘There is just a lot of uncertainty and you are just trying to be overly protective. I really do try to be as cautious as I possibly can… but it’s a bit lonely going to hospital appointments on your own all the time.”

Christine also said the pandemic affected her decision to go public with the news, explaining: ‘It wasn’t a big secret. Most people I knew, knew. But it was a lot to do with everytime I went to do the little instagram post, Boris [Johnson] would beat me to it and announce something dreadful on the news and it never felt like it was an appropriate moment to share a little bit of family happiness.’

‘Suddenly another week went by and you know what I am like anyway, I am very cautious and bit kind of low-key and no fuss.’

‘It sort of suited me to tick things along, to get to a point where you felt relatively safe, if you can do it at any point in a pregnancy. It just felt nice to get past the 12-week phase and then suddenly it was past 20 [weeks].’

As for her husband Frank, the football manager is ‘very excited’ to welcome his fourth child according to Christine.

He shares Patricia with the Loose Women presenter as well as daughters Luna, 15, and Isla, 13, with ex partner Elen Rivas. 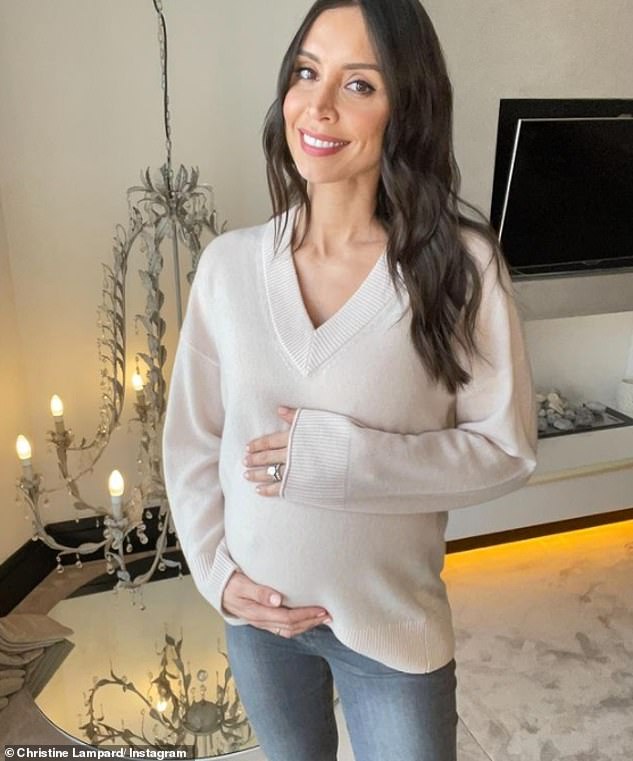 Baby news: Christine announced she and husband Frank are expecting their second child together, with the TV star sharing a snap of her baby bump on Saturday 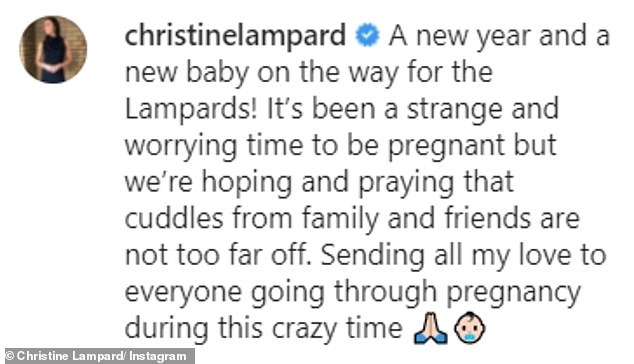 Surprise! She announced the news on Instagram and admitted it’s been ‘strange and worrying’ being pregnant during the COVID-19 pandemic

‘Football consumes 99pc of his brain but the other 1pc, he’s very excited,’ Christine laughed of her husband,

‘It’s a strange time to be pregnant, as much as it quite stressful because you are trying to take care of everything, yourself and this little baby.’

‘But on the flip side, you can’t go out, you can’t go partying, you don’t feel like you are missing out on anything because none of your friends and family are doing it either. It is a bizarrely odd time to be pregnant but quite appropriate because no one else is enjoying themselves.’ 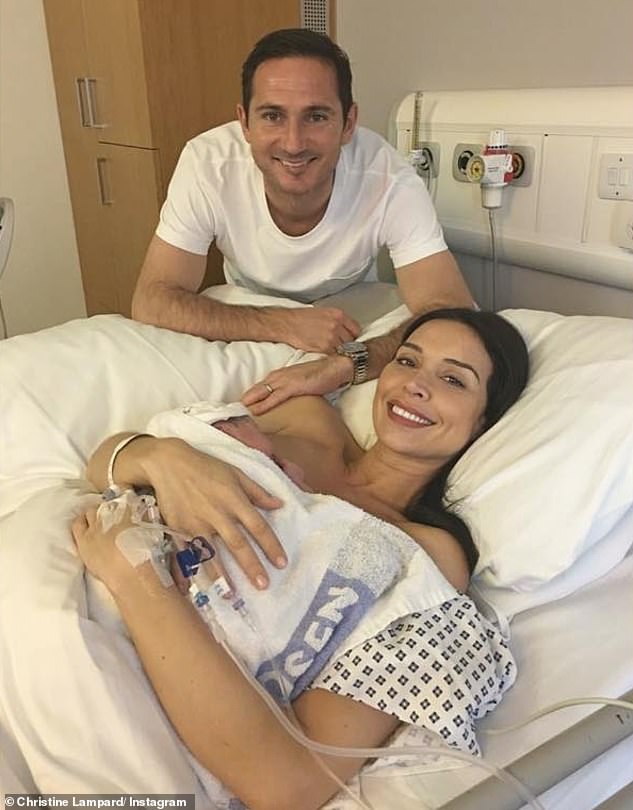 Sweet: Christine and Frank married in a lavish ceremony at St Paul’s Church in London in 2015 after six years together. They welcomed Patricia in September 2018 (pictured at her birth)

MENTAL HEALTH TOLL COVID RESTRICTIONS HAVE HAD ON MOTHERS-TO-BE

In November 2020 a landmark survey revealed that:

– 97 per cent said lockdown had increased their anxiety around childbirth

– One in five said they felt forced to have an intrusive examination to ‘prove’ they had entered the final stage of birth, in line with many hospitals’ draconian rules to allow their partner to join them during labour

The study into mental health was carried out by campaign group Pregnant then Screwed with 15,000 pregnant women taking part.

Christine and Frank married in a lavish ceremony at St Paul’s Church in London followed by a reception at The Arts Club in 2015 after six years together.

In 2018 they announced they were expecting their first child together, and the Loose Women star gave birth to Patricia Charlotte Lampard in September of that year.

Their daughter was named after Frank’s mum, who passed away in 2008 at the age of 58.

Christine shared her latest pregnancy news on Saturday, sharing a snap of her growing bump dressed in a cosy cream jumper as she offered her support to fans who are pregnant during such a ‘crazy time.’

She wrote: ‘A new year and a new baby on the way for the Lampards!

It’s been a strange and worrying time to be pregnant but we’re hoping and praying that cuddles from family and friends are not too far off.

‘Sending all my love to everyone going through pregnancy during this crazy time.’

Current NHS guidelines set out in mid December state that pregnant women should be allowed to take someone with them to hospital appointments and have them by their side during labour.

Under Covid regulations brought in in 2020 mothers-to-be were required to go to appointments alone and leave partners, friends or relatives outside. 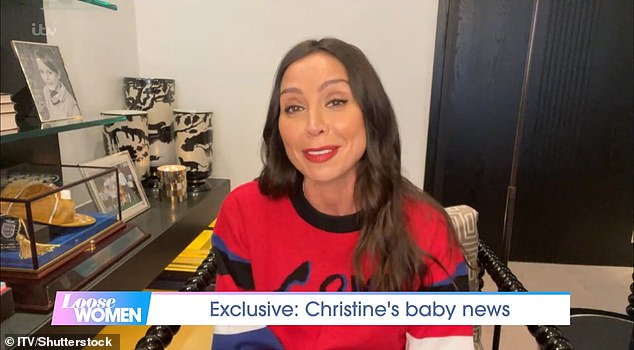 Worries: When her co-stars asked if she had any concerns about pregnancy and birth during the pandemic, Christine honestly answered: ‘I do, it’s the unknown’

But health chiefs in December told all hospitals in England to make maternity services work in a way that will allow women to bring someone else with them to an appointment.

If they did not have space to have socially distanced appointments before, they should move the service to somewhere where it’s possible, the latest guidance says.

Before the guidance had been updated, hospitals were encouraged to allow women to have people with them if they could do it safely, but it wasn’t mandatory.

Health chiefs now say hospitals must find a way to make it work at every stage of the pregnancy.

There are around 850,000 recorded pregnancies per year in England and Wales, suggesting there have been at least 600,000 since the pandemic started in March 2020.

Tens of thousands of women have been forced to attend appointments or deliver babies with only medical staff for company under rules designed to reduce the spread of coronavirus.