It’s the end of an era for Home and Away on UK screens as Tim Franklin bows out from his role as Colby Thorne after a three-year stint.

After being sent back to prison following his recent attack drama, Colby makes the difficult decision to cut all ties with his sister Bella – closing the door on any further jail visits.

Viewers later discover that Colby has killed one of the other inmates, wanting to prove himself as the jail’s new top dog. The shocking turn of events marks the end of Colby’s time in the show.

Here, Tim reflects on his time playing Colby and why he was in favour of this dramatic exit storyline.

Will you miss playing Colby?

“Of course, I will miss putting that police uniform on and I’ll definitely miss looking after the Bay and working with the massive bunch of legends on the show.

“That’s the biggest thing I’ve felt the most since leaving. I was lucky enough to make some life-long friends in those hallowed halls and I will miss them dearly.”

What were your favourite storylines?

“The Ross saga was definitely up there. Getting to play high stakes, high action scenes is always fun and was beautifully challenging.

“Marrying Ash Brewer (Chelsea), one of my best friends, was definitely a highlight. It was a bit of a wig out because it actually felt like a real wedding. We were shooting away for a whole week in some heroically beautiful locations. It will always be one of my favourite shoots.” 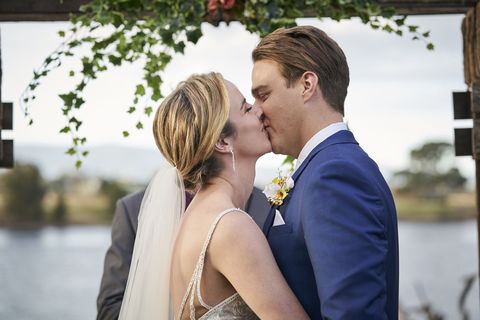 How was it to play a police officer?

“It was a little daunting at first, playing someone who has complete authority, because it’s not where I naturally sit. But I soon realised once you put the uniform on, it does all the acting for you. It makes you feel everything you need to.

“Working with the towering Jake Ryan (Robbo) and rescuing Sam Frost (Jasmine) was unreal. There were swat teams, assault rifles, hostages. I felt like a big kid playing out the ultimate action fantasy.

“Rescuing my family from Ross was another highlight and I think the climax of Colby’s storyline had a lot of fun, sliding around on dirt roads with that one.

“Being the cop of Summer Bay is probably one of the most dangerous jobs in the world. I’ve been stabbed, poisoned, nearly set on fire, held hostage, shot at, slapped, punched. It was the most exciting three years of my life.”

Does Colby feel betrayed by Willow after she testified against him as Witness X?

“No doubt it came as a shock to Colby, but he understands why she did it. She’s just protecting the family. At the end of the day – he did it! He has always been prepared to deal with the consequences, he just didn’t think it would have gone down like that.”

How did the writers approach you with this exit storyline?

“I have been dying since my first day, in a blaze of glory sort of ending. But when our head writer Lou [Louise Bowes] came to me with this idea, I really loved it because you empathise with Colby – hopefully – but you also know that he murdered someone.

“It makes you really think and question, and if that happens then I’m doing my job right.”

We find out that Colby has killed another inmate. Can you tell us what was going through his mind?

“Colby is feeling absolutely terrified, but has to try and conceal it. Weakness is what inmates pray on. They also prey on cops, so he is just trying to survive.”

Do you think Colby’s experiences in jail will change him as a person? What sort of Colby would come out of prison at the end of his long sentence?

“I like to imagine you would see a very hardened man. Jail has a way of doing that to a man, I imagine. But one thing will always remain in him, his love for his family and friends. He would probably be sporting some new gnarly tats, I’d imagine!” 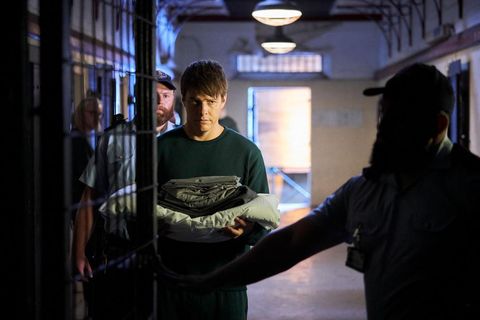 What advice would Colby have for Bella now that she is standing on her own two feet in the Bay?

“Try and be happy, use your support networks. Don’t feel guilt and try and move on.”

Are you pleased that Colby isn’t being killed off? Could we see a return in the future – or a prison break escape?

“In the Home and Away world, anything is possible. Colby could always come back and that storyline sounds like it would be a blast to play. I feel a mixture of emotions. Yes, I am sad I won’t be playing Colby anymore, but I also feel like his story had to come to that conclusion and I had a blast playing it all out.”

What will be the biggest thing you take away from your time on set?

“Most of all I will cherish the friendships and memories I made during my time on the show. I’ve also learnt so much about my craft. I feel like I could walk comfortably onto any set now and be able to be relaxed, which in my opinion is the most important thing.

“I ended up shooting 3,947 scenes while on the show. I’m just so grateful for the opportunity to be able to work so much.”

How would you sum up your time on Home and Away in five words?

Home and Away airs weekdays at 1.15pm and 6pm on Channel 5 (UK), with first look screenings at 6.30pm on 5STAR. Selected classic episodes are available via Amazon Prime Video in the UK.

Read more Home and Away spoilers on our dedicated homepage