I’m a Celebrity‘s Ant & Dec have responded to viewers’ criticism of the show’s new highlights episode.

The ITV reality show previously announced that it would follow the Love Island format of airing highlights and unseen footage on Saturday nights instead of a live episode.

This didn’t go down well some viewers, who soon took to Twitter to express their disgust at the lack of a regular episode, let alone a live trial as some had been anticipating.

Well, those critical fans may now be feeling a bit sheepish, because it turns out Ant & Dec really do read the stuff viewers put on Twitter. 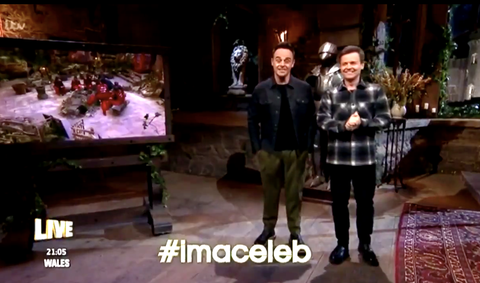 At the top of tonight’s episode (November 22), Dec said: “We are completely live without a highlights package in sight.”

Ant then continued: “Yes, thanks for all your messages about last night’s pre-recorded highlights show.”

In response to some of the more colourful complaints from viewers, Ant added: “We really appreciate the feedback, although I should point out that, medically, I can’t actually do that to myself.”

Prior to the start of the episode, the boys also poked fun at the angry comments in one of their Instagram Stories.

“Right, we’re off to rehearsals to rehearse the LIVE show. The LIVE show this evening,” said Ant. Dec then added: “We’re LIVE tonight with all new footage. Not a recap in sight. It’s live!”

I’m a Celebrity continues every night on ITV at 9pm, and The Daily Drop with Vick Hope continues at 5.30pm on ITV2.

Once Upon A Tyne by Anthony McPartlin and Declan Donnelly

Emily Atack – Are We There Yet?

Joel Dommett – It’s Not Me, It’s Them

Harry Redknapp – The World According to Harry

I’m a Celebrity… Get Me Out of Here! DVD game