The Lord of the Rings franchise will storm cinemas once again with newly-announced anime movie The War of the Rohirrim.

Directed by Kenji Kamiyama, this standalone epic revisits one of the major locations from Peter Jackson’s sequel The Two Towers, Helm’s Deep, and shines a light on the king who inspired the fortress’ name, Helm Hammerhand.

Variety reports that Will Matthews and Jeffrey Addiss (The Dark Crystal: Age of Resistance) have written the screenplay.

Warner Bros Pictures Group chief operating officer Carolyn Blackwood and New Line Cinema’s president Richard Brener shared in a statement: “All of us at New Line feel a deep affinity for the extraordinary world JRR Tolkien created, so the opportunity to dive back into Middle-earth with the team at Warner Bros. Animation is a dream come true.

“Fans know Helm’s Deep as the stage for one of the greatest battles ever put to film and, with many of the same creative visionaries involved and the brilliant Kenji Kamiyama at the helm, we couldn’t be more excited to deliver a fresh vision of its history that will invite global audiences to experience the rich, complex saga of Middle-earth in a thrilling new way.”

President of Warner Bros Animation Sam Register also shared a few words: “This will be yet another epic portrayal of JRR Tolkien’s world that has never been told before. We’re honoured to partner with much of the incredible talent behind both film trilogies, along with new creative luminaries to tell this story.” 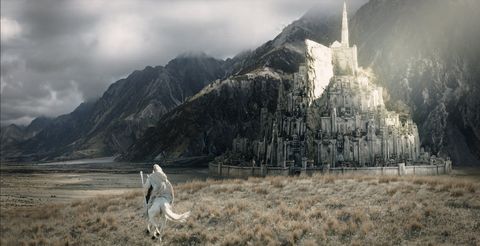 Related: Lord of the Rings actors reveal how the infamous line came about

A scheduled release date is yet to be confirmed, while The War of the Rohirrim will not be connected to Amazon’s upcoming series.

Lord of the Rings will air on Amazon Prime Video, with no confirmed release date yet.

Lord of the Rings: The Two Towers

The Lord of the Rings: The Return of the King

The Hobbit – An Unexpected Journey

The Hobbit: The Desolation of Smaug

The Hobbit: The Battle of the Five Armies

Lord of the Rings Monopoly Board Game

Lord of the Rings Trivial Pursuit

Lord of the Rings: The Fellowship of the Ring – The Complete Recordings

The Lord of the Rings Boxed Set Hardcover

The Hobbit & The Lord of the Rings Boxed Set Paperback

This month, Digital Spy Magazine counts down the 50 greatest LGBTQ+ TV characters since the Stonewall riots. Read every issue now with a 1-month free trial, only on Apple News+.