Michael J Fox has opened up about quitting alcohol two years after his Parkinson’s diagnosis.

The Back To The Future star, 59, said his first reaction to his diagnosis in 1991 at the age of 29 was to ‘double up on his drinking’.

He also recounted the story of when he broke his arm after a fall following spinal surgery, while he was learning to walk again, which was one of his lowest moments. 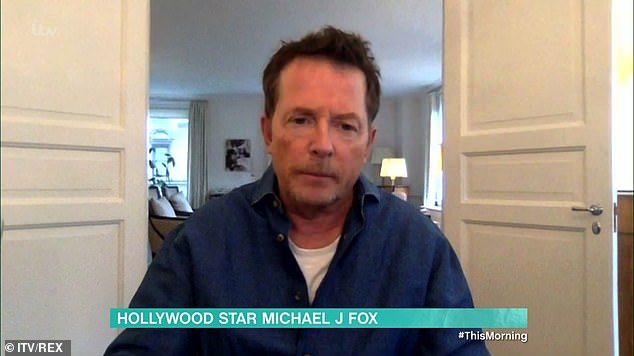 Opening up: Michael J Fox opened up on This Morning on Friday about quitting alcohol two years after his Parkinson’s diagnosis

Speaking on This Morning on Friday, the actor said: ‘My first reaction to the diagnosis was to double up on my drinking and that worked not at all.

‘So after about a year of that, so two years after my diagnosis, I quit drinking. I started to see things more clearly.

Michael had surgery on his spine in 2018 to remove a noncancerous tumour after experiencing intense back pain. 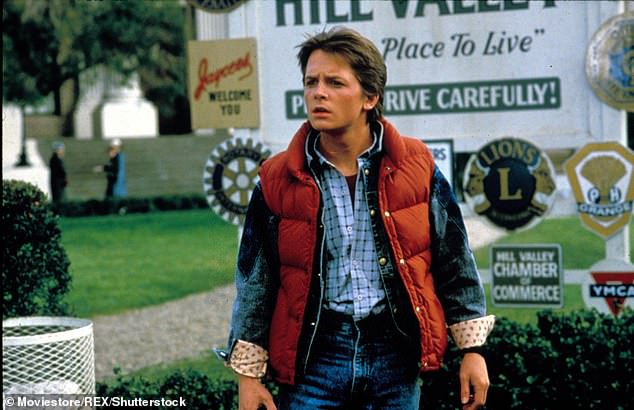 The actor has spoken about the devastating fall while he was learning to walk again which broke his arm.

He said: ‘It was a disaster. I was walking fairly well, I had to learn the connetics – literally, put the heel down, transfer the weight, all the mechanics of it.

‘And I got to a point where I felt pretty cocky about it. I got your wheelchair, walker, cane, all the apparatus, and I got to where I was just free-style walking down the hallway.’

Michael had to return to New York from his vacation with his wife for a cameo in a Spike Lee film.

He told his wife that he could do it on his own and he would be fine. 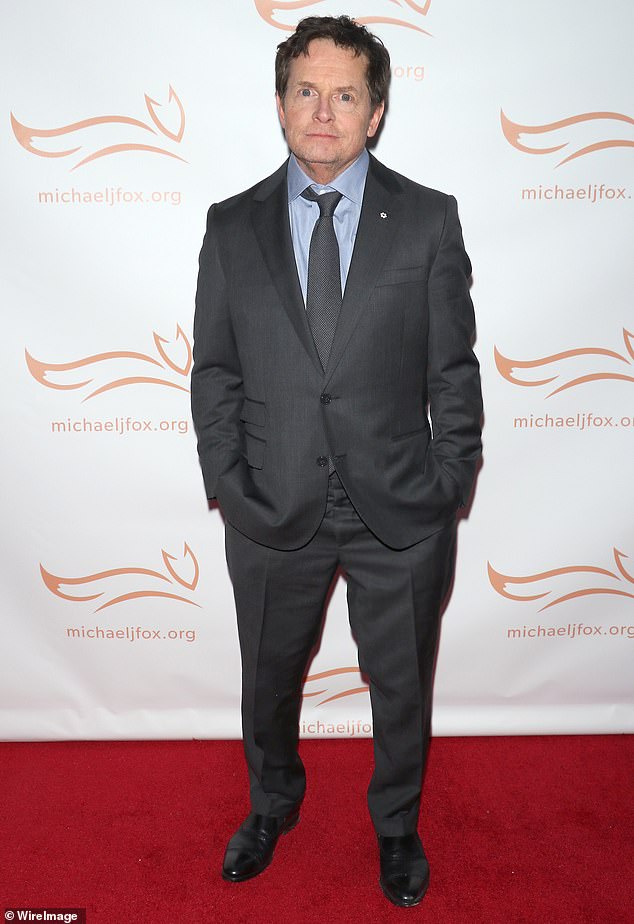 Journey to acceptance: The actor said when he quit drinking and started to see things more clearly, starting to accept that he had Parkinson’s (pictured in November 2019)

The actor continued: ‘So the first morning I was alone and I woke up and I fell down alone and broke my arm and I was waiting.

‘I had to get the phone – and that was all complicated – and make a call and got an ambulance on its way. And I sat on the floor waiting for the ambulance…’

Michael first noticed changes in himself when making Doc Hollywood in 1991, thinking he had a sports injury.

He had a sore left shoulder and a twitching in the little finger on his left hand, which wouldn’t stop.

He said: ‘I didn’t think it was anything substantial. Then I went to see this neurologist and he gave me this perfunctory exam… with the nose touching, the arm reaching and all of that stuff. 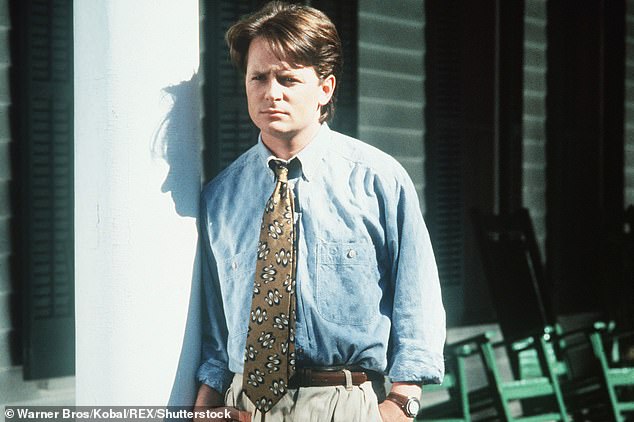 First changes: Michael first noticed changes in himself, including a sore shoulder and twitching finger, when making Doc Hollywood in 1991 (pictured)

‘And then he said, “You have young onset Parkinson’s. You’ll probably be able to work for another 10 years.”‘

Michael told This Morning that his pill ‘is just kicking in’ and he feels ‘a lot better than he looks’.

He said: ‘I went through this period of time, I wrote about it in the book, where I was questioning the things that I was experiencing and really got to deal with some dark stuff.

‘And that was really useful for me. It brought me back to a place of gratitude. As long as I’ve got more to be grateful of than I do to be regretful of, my life is good.’

Michael set up the Michael J Fox Foundation 20 years ago which has so far put $1billion into research. 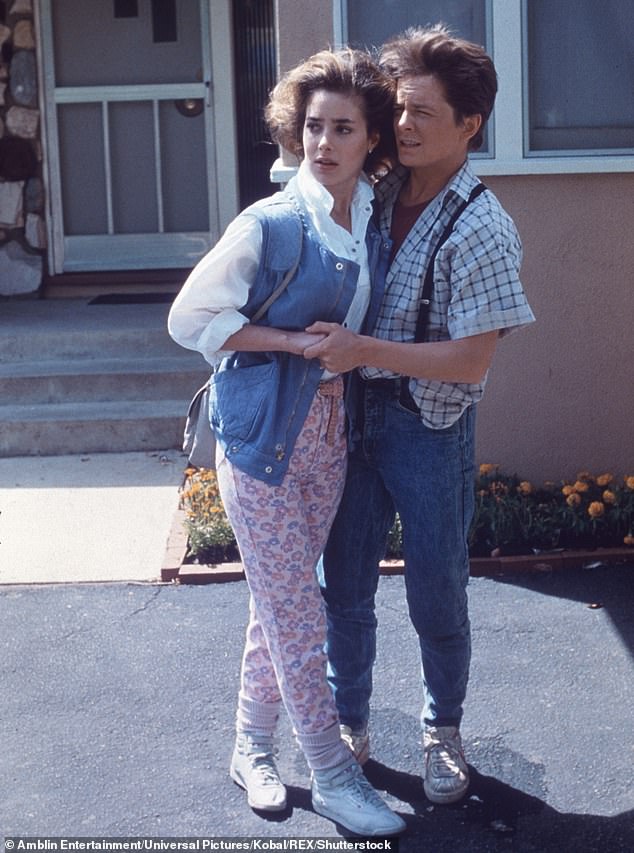 The Stuart Little voice actor kept his diagnosis a secret for seven years until he confessed.

On Thursday’s BBC breakfast, the star said he feared he wouldn’t be able to make his fans laugh again.

He added that he was surprised when he was met with a ‘receptive and supportive’ response from audiences after he publicly disclosed his health battle in 1998.

Explaining his initial worries, the comedian said: ‘My fear was that if they knew that I had an illness, a condition, that they wouldn’t be able to laugh.’

The screen star went on to highlight the positive reaction he received from his fan base as he added: ‘You know it was a really strange period of time because over a period of seven years that I kept it to myself. 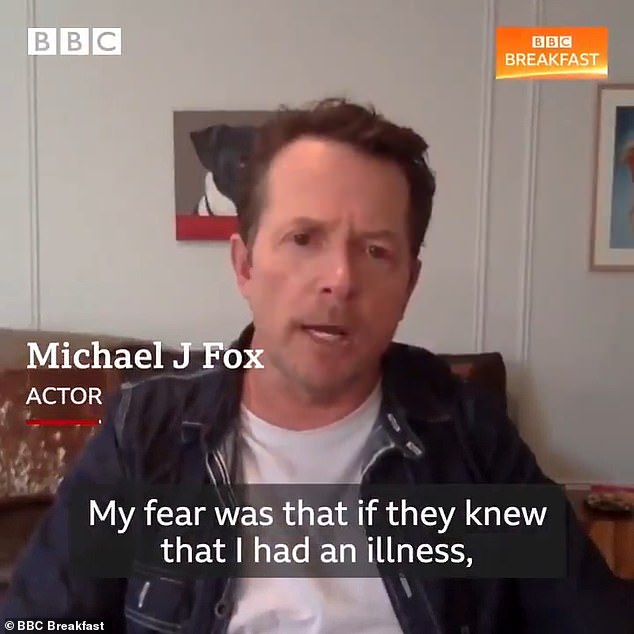 ‘It was a strange period’: Michael revealed he kept his Parkinson’s a secret as he feared he wouldn’t be able to make his fans laugh again on Thursday’s BBC Breakfast

In his new book, No Time Like The Future: An Optimist Considers Mortality, Michael admitted he’s considering a second retirement from acting amid his health problems.

He said that he’s content to quit acting amid a pile-up of health complications which have impacted his ability to perform.

The Canadian actor wrote: ‘In fairness to myself and to producers, directors, editors, and poor beleaguered script supervisors, not to mention actors who enjoy a little pace, I enter a second retirement.

‘That could change, because everything changes. But if this is the end of my acting career, so be it.’

Memories: The actor reminisced on a close encounter with the late Princess of Wales during an appearance on The Tonight Show Starring Jimmy Fallon

On Wednesday, the star appeared on The Tonight Show Starring Jimmy Fallon and recalled sitting next to Princess Diana at the premiere of Back To The Future in 1985.

He said: ‘She was sitting next to me. The lights go down and the movie starts and I realise I am one fake yawn and an arm stretch away from being on a date with her, which is hilarious.’

He continued: ‘The movie started and also I had to go pee. And so for the rest of the movie, I’m sitting there, like, dying.

‘I can’t say anything to her and I can’t walk away from her because I can’t turn my back on her. So it was just agony.’

He concluded  the night ‘could have been the greatest night of my life but it was just a nightmare. A pee-holding nightmare.’

WHAT IS PARKINSON’S DISEASE?

Parkinson’s disease affects one in 500 people, and around 127,000 people in the UK live with the condition.

It causes muscle stiffness, slowness of movement, tremors, sleep disturbance, chronic fatigue, an impaired quality of life and can lead to severe disability.

It is a progressive neurological condition that destroys cells in the part of the brain that controls movement.

Sufferers are known to have diminished supplies of dopamine because nerve cells that make it have died.

There is currently no cure and no way of stopping the progression of the disease, but hundreds of scientific trials are underway to try and change that.