They’ve been going from strength to strength after coupling up in the Love Island villa two years ago.

And Molly-Mae Hague admitted that she’s feeling broody after watching her beau Tommy Fury dote on his adorable baby nephew over the Bank Holiday Weekend.

The reality star, 22, shared a sweet video of her boxer beau, 21, placing a kiss on the little one’s forehead to Instagram on Sunday, gushing: ‘My heart… and my ovaries’. 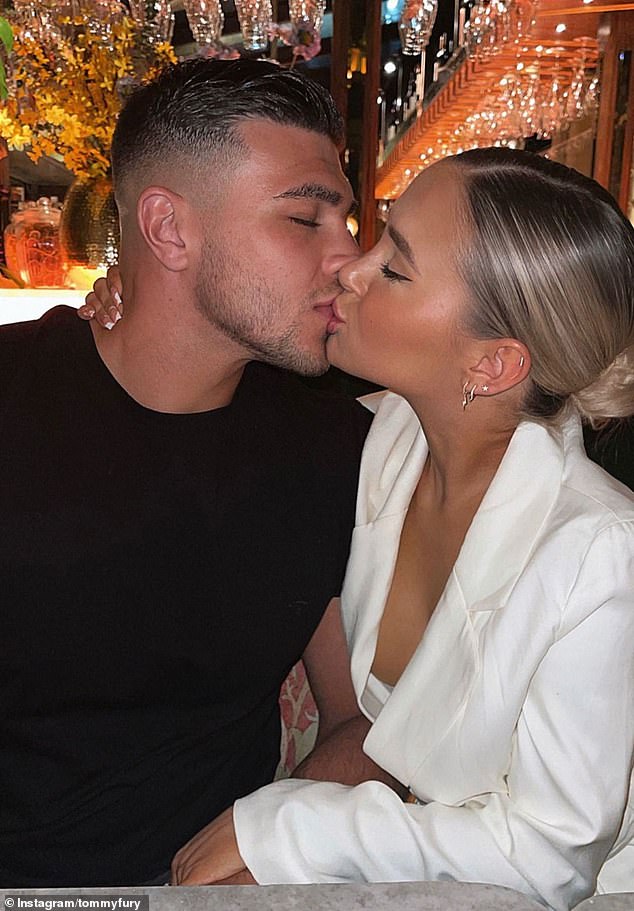 Tommy looked every inch the doting uncle as he held onto the little boy while standing outside in the sunshine.

The sportsman, who was wearing a white vest and grey shorts, then turned around to look out at the trees and what seemed to be a golf course.

Later in the day, the blonde beauty posted another sweet video of the baby boy having a look at her laptop while she worked on new YouTube content. 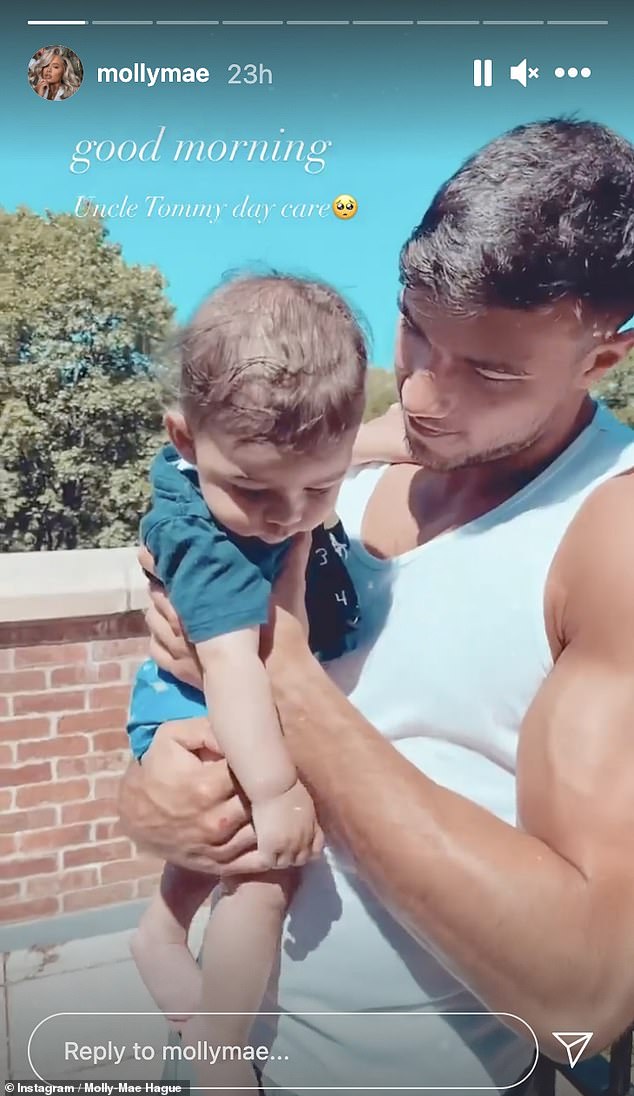 Adorable: The Love Island star, 22, shared a sweet video of her boxer beau, 21, placing a kiss on the little one’s forehead to Instagram on Sunday

She joked: ‘So guys, I finally employed a video editor…. He’s kinda learning on the job.’

The loved-up couple were also seen strolling in London with the tot on Sunday, with Molly-Mae taking control of the pram during the walk.

Tommy and Molly-Mae have spoken candidly about their plans to start a family in the past, however the blonde beauty has insisted they’re not rushing things. 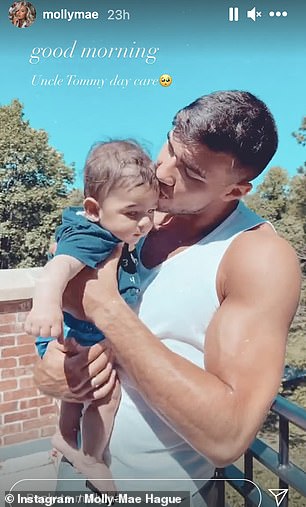 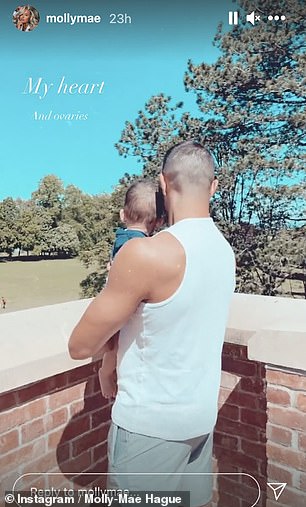 ‘My heart… and my ovaries’: Molly-Mae filmed Tommy and the little boy as they stood outside and enjoyed the sunshine 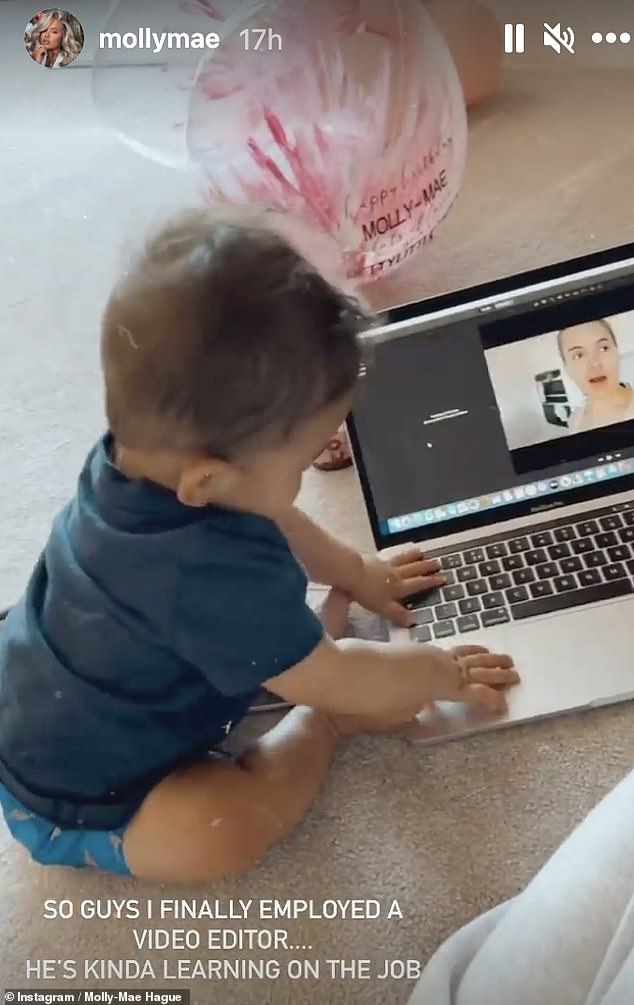 Starting him young: The blonde beauty also joked that she’d found a new video editor after Tommy’s nephew played with her laptop

Molly-Mae previously revealed she is no longer using contraception but insisted she is not ‘trying’ for a baby during a video posted in November.

‘That is not because we are trying for a baby, just to clarify. I’m not on any form of contraception because I can’t find any contraception that I like. 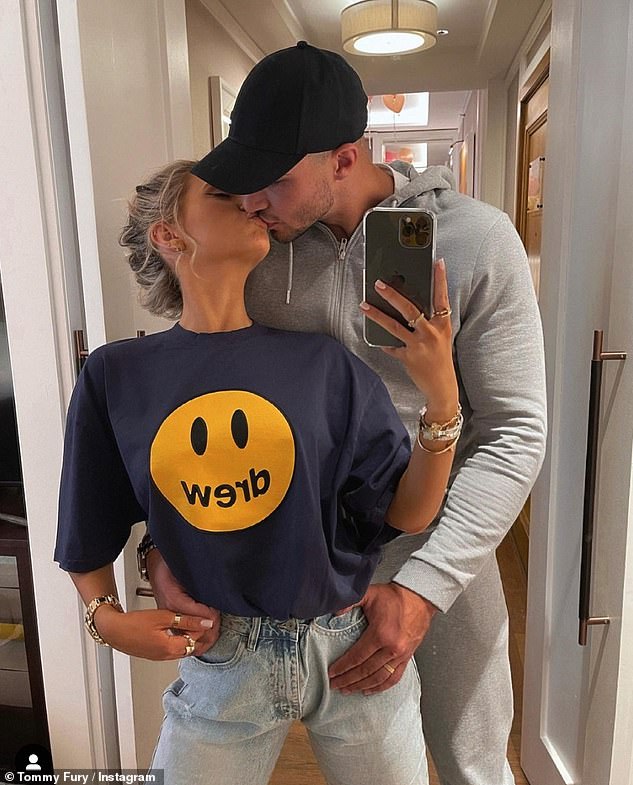 ‘HES WEARING A RING?’: The Love Island star’s fans went into a frenzy last week with a snap with her boyfriend Tommy Fury wearing a ring

‘I went on the pill a few weeks ago for the first time. I found it so hard to find a good time each day to take the pill. I started taking it and no, it’s not for me.

‘I felt headache-y, I felt tired, I felt emotional like I was crying for no reason. Tommy was literally like, ‘What is wrong with you?’ and the only thing that had changed was that I was on this pill. It was not for me… I’m living life on the edge guys!”

She then addressed fans queries over when she’s set to start a family, saying: “I’ve answered questions like this before but I don’t know like with the baby thing.

‘I just feel like when the time is right, we will know. Honestly, if it was up to Tommy, we would have a baby today, tomorrow and the next day. He wants so many kids.’ 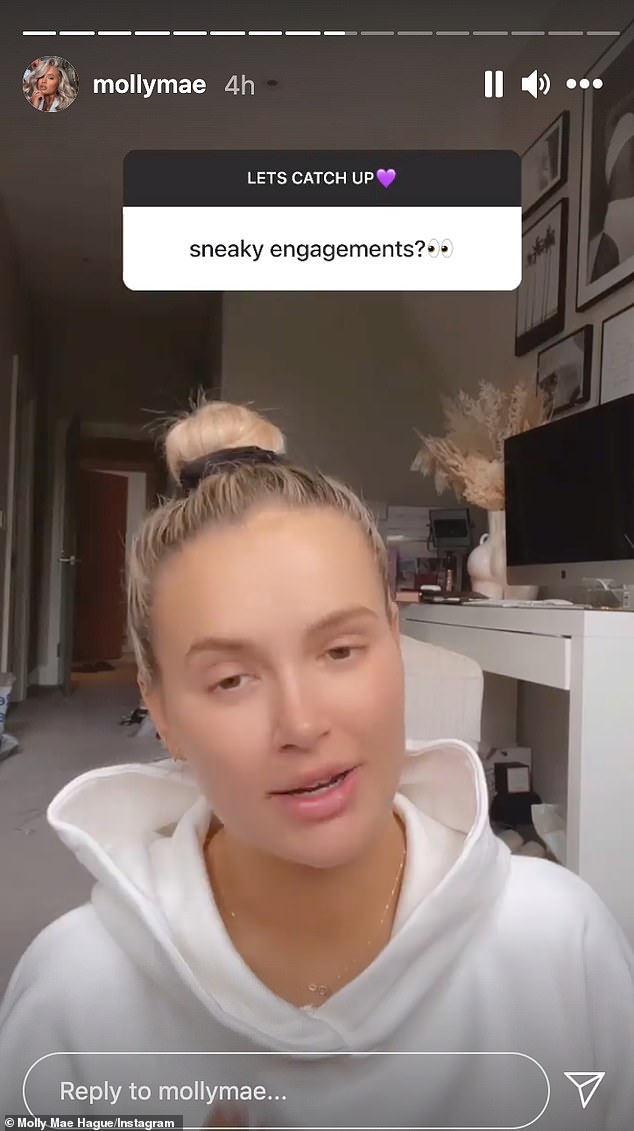 ‘I’m not engaged!’: Molly=Mae took to Instagram on Saturday to hit back rumours beau Tommy had proposed after a cryptic snap sent tongues wagging

Tommy previously said: ‘Yes we have, we’ve been snoodling in the bedroom, I want twins by the time I’m 22, simple as that. Molly wants six kids, I want eight.’

She went on: ‘I definitely, definitely want kids soon, but not soon soon. I always feel like a broken record with the whole kids thing because I always talk about it.”

‘I don’t mind having a child out of wedlock. We’re just so happy and we’re so, so excited for the day that it does happen because we just can’t wait.

‘I know Tommy will be the most incredible dad. Like oh my goodness, it literally makes my heart fill up when I think of Tommy holding our child. It’s just so exciting.’ 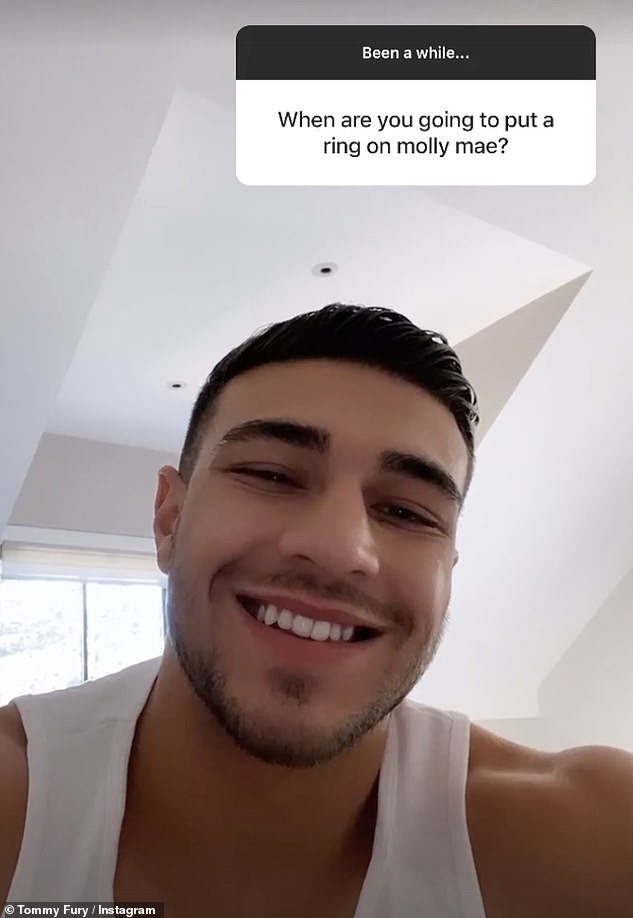 Couple goals: Back in April, Tommy told his 3.3 million followers that he was going to put a ring on his girlfriend Molly-Mae’s finger ‘sooner than you think’

While earlier this week, Molly-Mae’s fans fans went into a frenzy when a snap with her boyfriend Tommy appeared to show they’d got engaged.

And she took to Instagram on Saturday to hit back at rumours her beau, 22, had proposed during a candid Q&A with her followers.

The Love Island star said: ‘Do you really think we’ll announce to you that we’re engaged by a sneaky picture of Tommy wearing a ring?’

And when one fan responded asking about ‘sneaky engagements’, the reality star took the opportunity to lay rumours to rest.

Molly-Mae said: ‘This really makes me laugh because I did see a few of you commenting on Tommy’s last picture saying “he’s wearing a ring”.

‘Like, do you guys really think we’ll announce to you that we’re engaged by a sneaky picture of Tommy wearing a ring?

The couple have been dating ever since they first met on Love Island in 2019 and moved in together shortly after dating.

Back in April, Tommy told his 3.3 million followers that he was going to put a ring on his girlfriend Molly-Mae’s finger ‘sooner than you think’.

When asked by a follower: ‘When are you going to put a ring on Molly-Mae?’

The reality star responded: ‘Sooner than you think’, while winking at the camera. 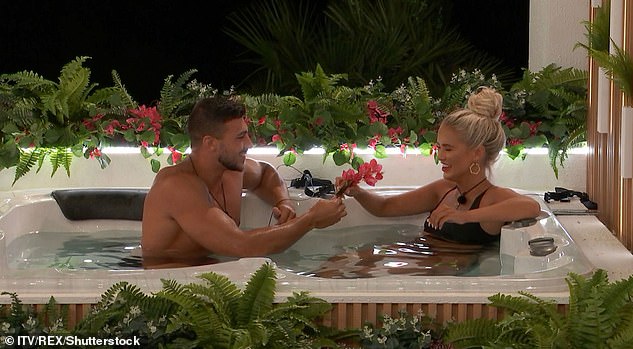 True love: The couple have been dating ever since they first met on Love Island in 2019 (pictured) and moved in together shortly after the show ended