A 90-year-old widower who has the same pub lunch every day was astonished to hear strangers had left a £700 bar tab to keep him going for months.

Pete, a war veteran who lives alone, goes to the Moulsham Inn in Chelmsford nearly every day to order the same meal – Hunter’s chicken with a glass of red wine.

Pub landlord Tim Mepham, 39, grew close to Pete, whose wife died 11 years ago, and decided to post a video of him on TikTok.

The clip racked up hundreds of thousands of views, with commenters asking how they could fund the OAP’s meal.

Mr Mepham posted Pete’s table number and hundreds of orders for his food and drink came flooding in through the app, giving him a bar tab of over £700. 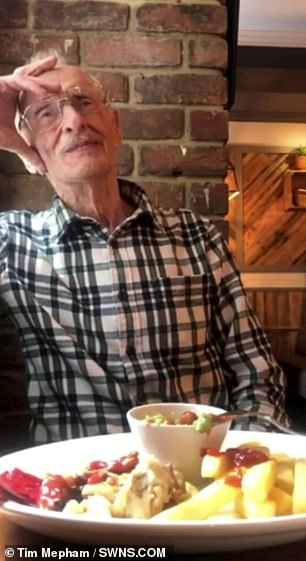 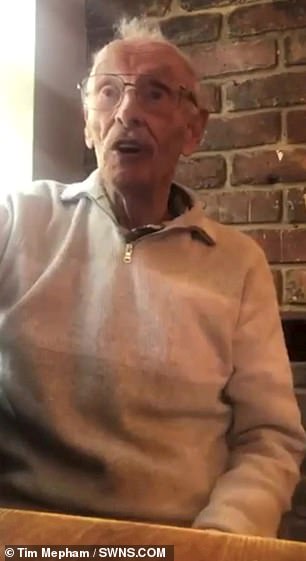 Pete, a war veteran who lives alone, goes to the Moulsham Inn nearly every day to order the same meal – Hunter’s chicken with a glass of red wine

A heart-warming video shows the landlord telling Pete strangers had bought him 90 glasses of wine and weeks’ worth of lunches.

Mr Mepham said: ‘Pete is genuinely one of the most polite gentleman I’ve ever met.

‘He’s so thankful for what we do for him, the time he spends with us and with what’s happened recently, and his sense of humour is razor sharp.

‘People bought Pete drinks because they just thought he was a nice guy. He isn’t in need, or poor and people didn’t pity him, they just loved him. ‘

Mr Mepham has known Pete since he started working as manager at the Moulsham Inn in Chelmsford three years ago.

He described him as ‘the perfect granddad that everyone loves.’

Mr Mepham said: ‘He has stories for all ages. He does impressions of cartoon characters that kids love. He can make you laugh and make cry in one story. ‘ 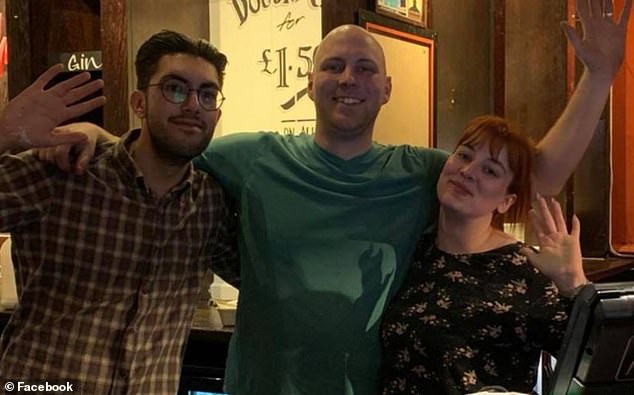 Pub landlord Tim Mepham (pictured centre with staff), 39, grew close to Pete, whose wife died 11 years ago, and decided to post a video of him on TikTok

After noticing he was a regular, he sat down and introduced himself and had a chat with him until his lunch arrived – which now happens most days.

He said: ‘Pete comes in pretty much every day. Quite often his son-in-law will have lunch with him as he works locally, but when Pete’s alone I will sit with him until his lunch arrives and if I’m not there, one of my team will.’ 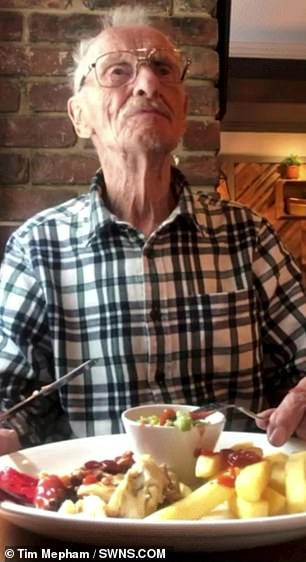 ‘Pete loves talking about his wife, who sadly passed away eleven years ago. He also talks in great detail about his time served during the war. He also keeps me updated on the gardening work he does now it’s sunny again.’

On May 24, Tim posted a video introducing Pete on his TikTok account which quickly gained hundreds of thousands of views.

He said: ‘So many people commented about if and how they could but this lovely man a drink, so I posted a video on how you could, via the order and pay app.

‘That day the ticket machine didn’t stop and Pete had 120 glasses of wine bought for him and enough hunters chicken to last him months.’

His tab reached over £700, and the next day Tim told Pete the good news.

He filmed his awe-struck reaction, and the clip got 1.6m views in just the first day.

Tim said: ‘Pete’s story isn’t unique, maybe the going viral part is, but there are so many people out there who are alone and lonely.

‘Elderly, vulnerable and even teenagers. Loneliness can affect many people in many ways and after the year we’ve all had I think it’s so important to reach out to these people.

‘Pete’s story had truly proven the kindness of strangers.

‘Pete has asked people stop buying him food and drinks now as he believes there must be so many other people out there we could support.’

Tim, known online as ‘The Pub Man’, is setting up a ‘Meet and Greet Lunchtime’ at his establishment where lonely people can come together to socialise inspired by Pete.