Princess Eugenie shared a sweet video of her five-month-old son dressed in an England baby grow ahead of tonight’s Euro 2020 final – as reports emerged suggesting she was forced to cancel his christening.

The royal, 31, posted the video of her baby boy August Brooksbank on her Instagram story today. August is seen happily kicking his legs on the floor, while dressed in an infant version of the Three Lions strip.

Eugenie, who kept her son’s face off camera, shared the video with the Three Lions football anthem.

It came amid reports Eugenie and husband Jack Brooksbank’s christening for their son was ‘cancelled at the last minute due to a Covid scare’. 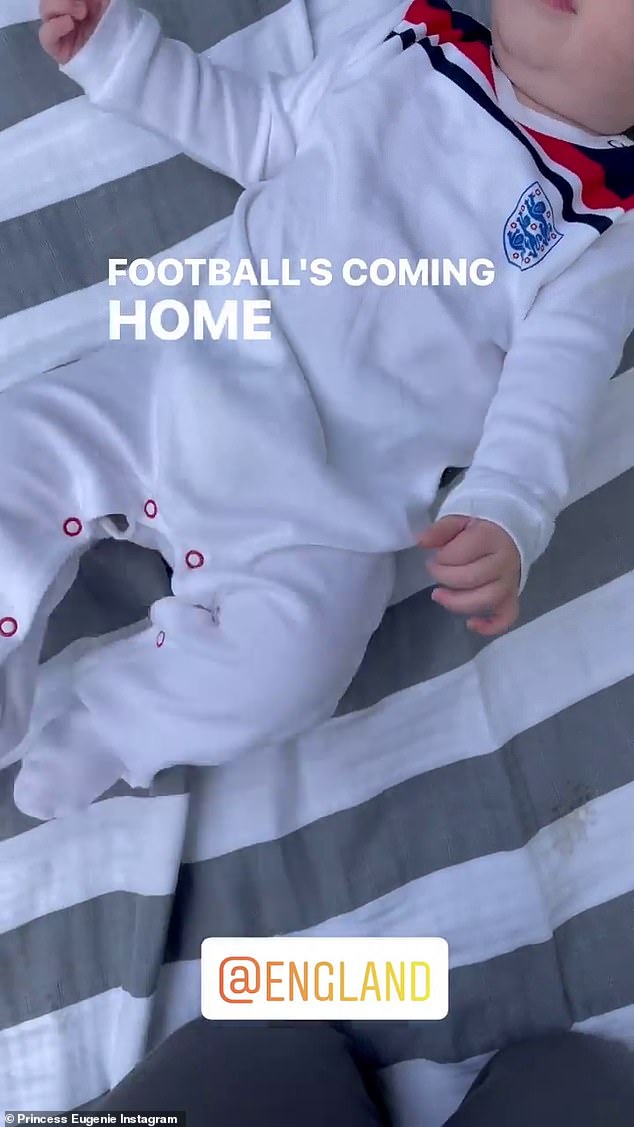 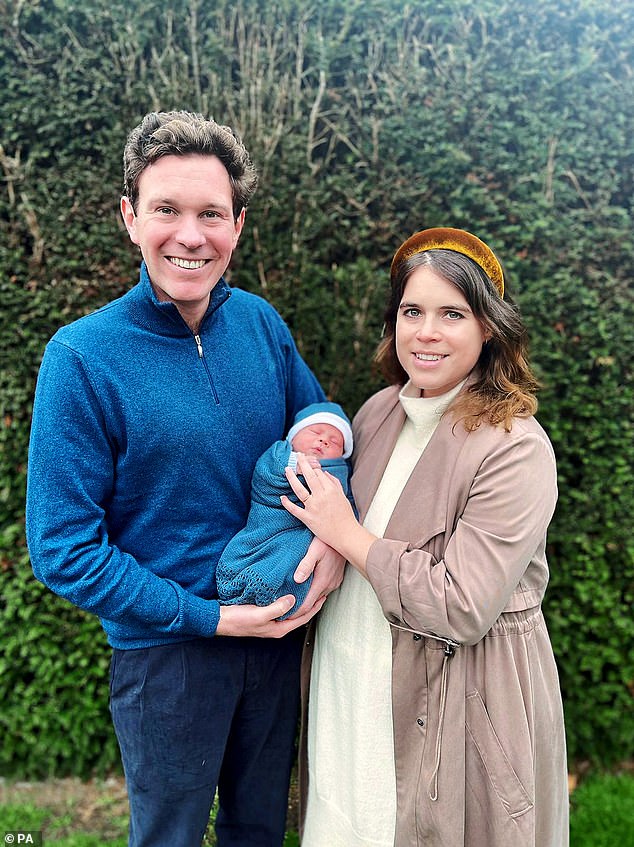 The service was due to take place on Saturday at the Royal Chapel of All Saints in Windsor Great Park.

However, celebrations were apparently scrapped after a fellow attendee is said to have either tested positive for the virus or been pinged by the NHS Covid-19 app minutes before meaning the gathering had to be cancelled.

The Queen, 95, is understood to have been among guests due to attend to the ceremony and afterparty for her great-grandson, according to The Mirror.

The christening was to be held at Royal Chapel of All Saints with less than 30 people attending before a reception at Royal Lodge, according to reports.

Others on the guest list are understood to have included proud grandparents Prince Andrew and Sarah Ferguson, who would be hosting the after party.

A source said: ‘One guest tested positive or was pinged for Covid contact and therefore no one else was able to gather. 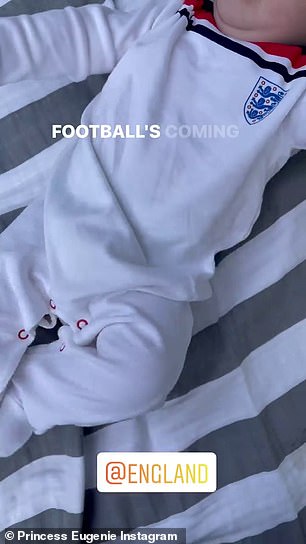 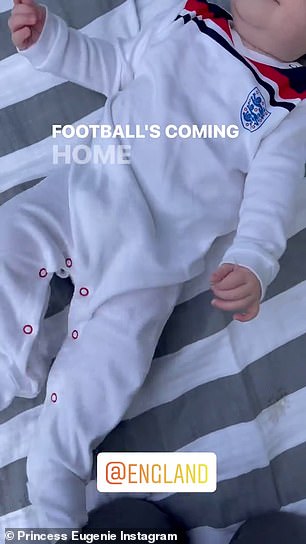 August is seen happily kicking his legs on the floor, while dressed in an infant version of the Three Lion strip 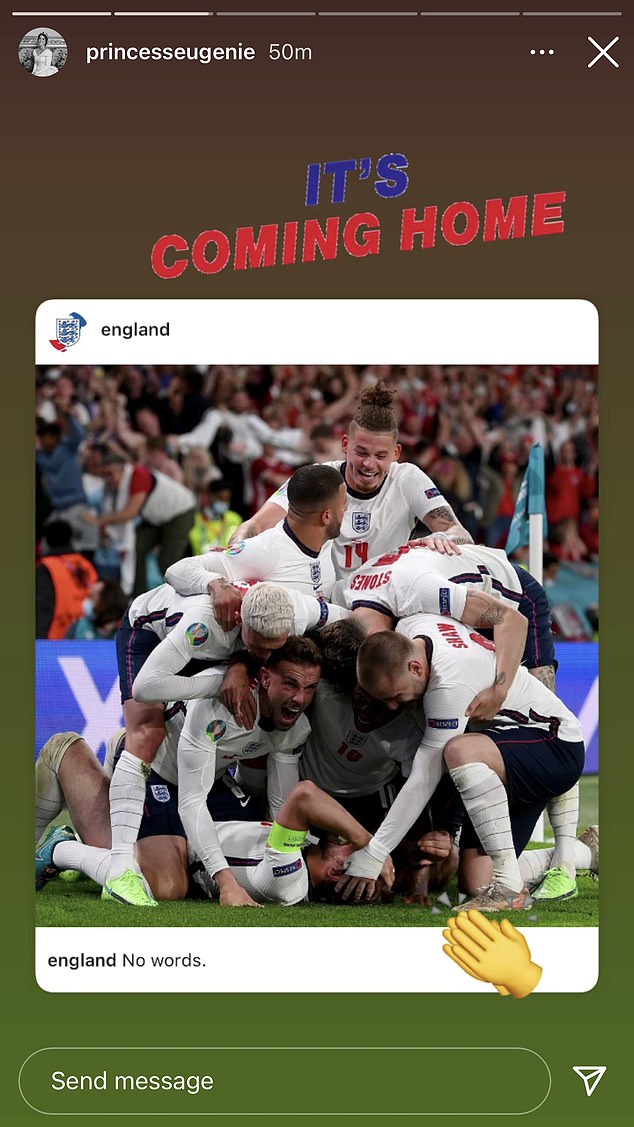 The Royal Family have been outspoken in their support of Gareth Southgate and his team. Pictured, an Instagram post shared by Princess Eugenie after the win last week

‘As a result, they called off the service and reception party afterwards at Royal Lodge, Prince Andrew’s home.

‘The Queen and Eugenie’s parents Fergie and Prince Andrew had all been due to attend.’

The Royal Family have been outspoken in their support of Gareth Southgate and his team, with the Queen and the Duke and Duchess of Cambridge releasing messages in support of England ahead of the game.

Prince William and Kate Middleton are attending the game with their seven-year-old son Prince George.

William shared a video message on Twitter in which he wished manager Southgate, Three Lions captain Harry Kane and ‘every member of the England team on and off the pitch’ the ‘very best of luck’. 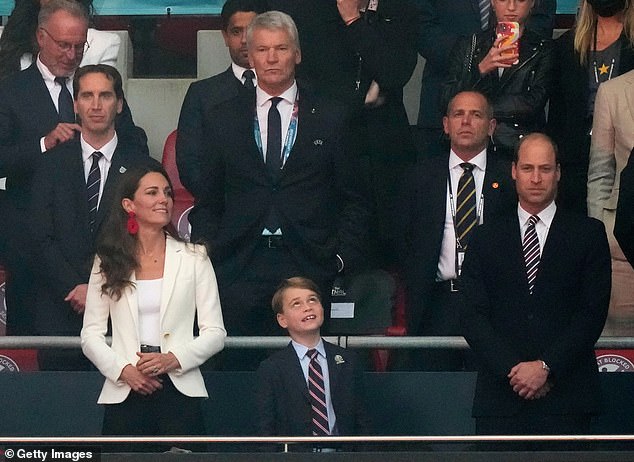 The duke, who is also the President of the FA, appeared to be crossing his fingers for victory while at Wimbledon yesterday, where he and Kate attended the grand slam to watch Australia’s Ashleigh Barty win the tennis Championship in an epic three-set final against Karolina Pliskova.

William said: ‘Gareth, Harry and to every member of the England team on and off the pitch, just want to wish you the very best of luck tonight. What a team performance it’s been, everyone in the squad has played their part. All the backroom team as well have been truly essentially. 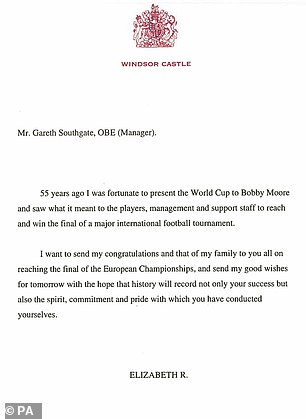 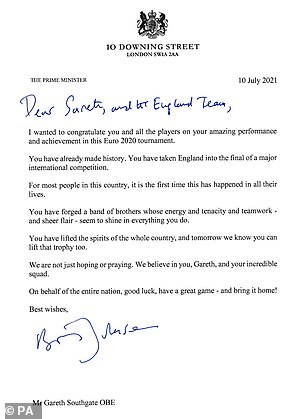 The Queen (left) congratulated Gareth Southgate and the England players for reaching the Euro 2020 final and praised their ‘spirit, commitment and pride’, while Boris Johnson praised the ‘band of brothers’ (right)

The duke’s grandmother the Queen paid tribute to the ‘spirit, commitment and pride’ of the squad in a good luck message. In her written message, the monarch recalled presenting the Jules Rimet trophy to Bobby Moore after England beat then West Germany in the World Cup – almost six decades ago.

She said: ‘Fifty-five years ago I was fortunate to present the World Cup to Bobby Moore and saw what it meant to the players, management and support staff to reach and win the final of a major international football tournament.

‘I want to send my congratulations and that of my family to you all on reaching the final of the European Championships, and send my good wishes for tomorrow with the hope that history will record not only your success but also the spirit, commitment and pride with which you have conducted yourselves.’