Star Wars: The Rise of Skywalker might have been released more than a year ago now, but there are still some mysteries that Star Wars is slowly answering.

We all know by now that Emperor Palpatine was resurrected on Exegol in the Unknown Regions where he, somehow, had amassed a huge army of Sith Eternal to carry out his Final Order.

Various elements of this plan – such as how Palpatine returned and how all those ships were built – have been explained since the release of Rise of Skywalker. And now we’ve had one extra nugget of information that sheds new light on just how long Palpatine had planned his Final Order.

Star Wars‘ ongoing Darth Vader comic book series from Greg Pak and Raffaele Ienco (set after the events of The Empire Strikes Back) has been following Darth Vader on a previously-unknown test of character. Palpatine orchestrated this test on Mustafar after the evil Sith Lord thought Vader was going weak after meeting Luke Skywalker.

We knew that Vader didn’t die before Return of the Jedi, so it’s no surprise that he rose to the challenge, even when Palpatine sent Sith assassin Ochi of Bestoon to hunt Vader down. The previous issue saw Vader get a Sith Wayfinder from The Eye of Webbish Bogg, but his test wasn’t over.

The latest issue of Star Wars: Darth Vader mostly focuses on Vader’s battle with a band of killer robots called the Droid Crush Pirates of Bestoon, sent after him by Ochi. He manages to destroy them all because he’s Vader, after all, and then his focus turns to Ochi and the Sith Wayfinder.

“I took this from the Eye. I know it leads to the Emperor’s secrets,” Vader tells Ochi before he forces him to show him how it works. Ochi tells him that there are “nav coordinates hidden in the glyphs” and they lead to none other than Exegol.

The issue ends with Vader on his way to Exegol, along with unwilling passenger Ochi, but there’s a massive space alien in his way. Not that it’ll probably stop Vader from finding out what Palpatine’s secret is on Exegol. 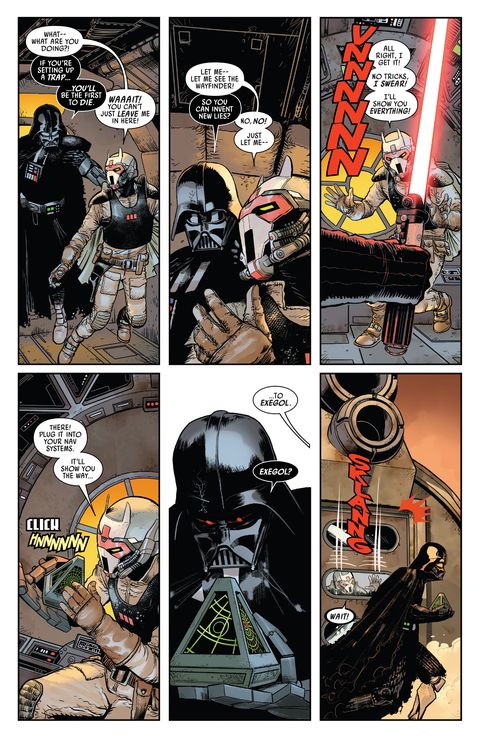 We’ll have to wait until the next issue, out February 10, to find out just what happens to Vader and Ochi when they arrive at Exegol. However, we do know that the revelation shows Palpatine’s plan was well underway before his death in Return of the Jedi.

Effectively, it’s a retcon of Palpatine’s surprise return and his Final Order plan in Rise of Skywalker, but it’ll still be good to know exactly how he got it all started. Was it ready to go as soon as he was thrown down that reactor shaft? Perhaps there was a ship from Exegol ready and waiting to pick up his corpse in order to clone it.

It won’t solve any fan frustrations with the Final Order and Rise of Skywalker in general, but at least, retroactively, it’ll make a bit more sense that Palpatine apparently had his resurrection and revenge planned around the time of Return of the Jedi.

The entire Star Wars Skywalker Saga is available to watch on Disney+. You can also own the Saga on DVD, Blu-ray and 4K Ultra HD.

Star Wars: The Rise of Skywalker