A throuple who identify as a fairy, leprechaun and troll have told how they have a ‘fluid working family unit’ – but would consider adding another mythical creature into their relationship.

A Seattle-based trio who have named themselves Princess Lolly the fairy, Gunther the troll, and Ion the Leprechaun appeared on This Morning today where they gave an insight into their polyamorous relationship.

While Lolly and Gunther run fairy and renaissance festivals, Ion has a ‘secret’ job in maths and science, but is keen to help the others establish a ‘dream haven’ with their mythical themed festivals.

The group are in a ‘closed polycule’, and say that while they’re cautious to add others into their relationship, they would consider introducing another person who identifies as a fairy, or an ‘adventurous healing sort’. 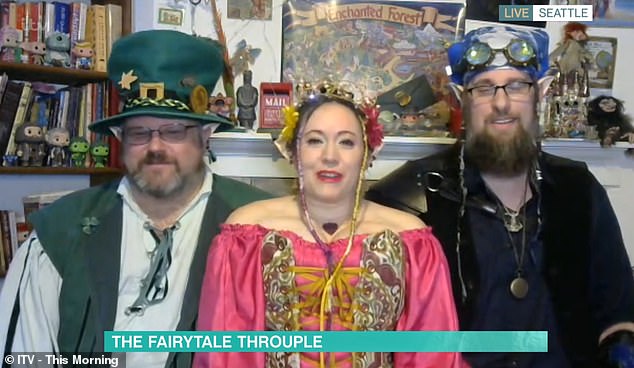 Seattle-based trio Princess Lolly the fairy (middle), Gunther the troll (right), and Ion the Leprechaun (left) appeared on This Morning today where they gave an insight into their polyamorous relationship

‘We are in what we would call a closed polycule’, said Lolly. ‘We consider ourselves a closed family unit.

‘The more people, the more everyone’s time becomes divided and we have a really good fluid working family unit.’

She later added: ‘I think actually the only type of other person that would fit is a fairy or a very adventurous healing sort. We are pretty dedicated to what we do so if you can’t be dedicated with us then it won’t work in the long run.’

Viewers were stunned by the segment, with one writing: ‘I’m at the ‘why did that segment on fairy people get so much airtime’ phase of lockdown. Yeah it was dragon on.’ 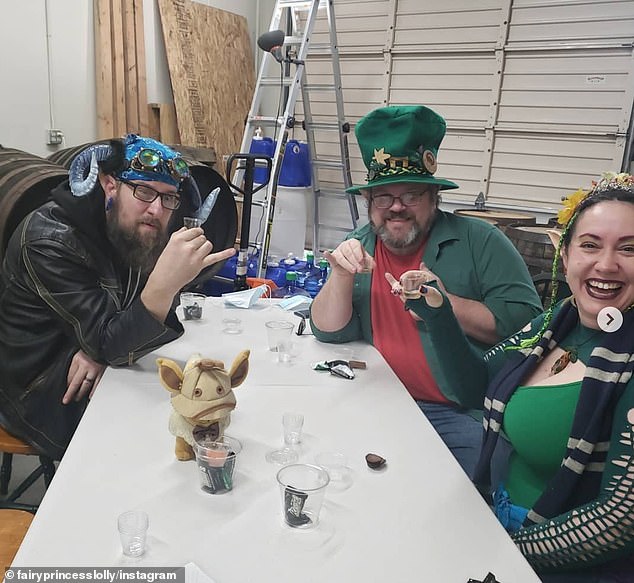 While Lolly and Gunther run fairy and renaissance festivals, Ion has a ‘secret’ job in maths and science, but is keen to join the others with their mythical themed festivals. Pictured, together

Another said: ‘Only on #thismorning could they go from a segment about a fairy, troll and leprechaun in a relationship to homeschooling help.’

A third agreed: ‘#ThisMorning What the? A fairy, troll and leprechaun???? my god are they really that stuck for guests??’

Lolly has identified as a mythical creature for years, but could not give a specific timeline as fairies don’t tend to keep track of time.

She said: ‘As a full time fairy basically my duty all the time is to traipse about in the land of real and spread what fairy magic I can.’

When asked when she became a fairy, she explained: ‘Many years ago. We don’t like to count too much, you know how counting goes with time and fairies, but since I was a youngling.’

Gunther, who identifies as a troll, insisted that he never gets jealous of Ion, and that the trio make sure to split their time evenly between the three of them.

‘I’ve never gotten jealous’, he said. ‘We do a lot of what we’re doing as a unit and a family, in everyday life and in general and I’ve said the biggest thing is making sure we have that time we can get in there.’

When it comes to sleeping arrangements, Lolly explained that they each have separate bedrooms, but ‘make sure there is an even division of time’. 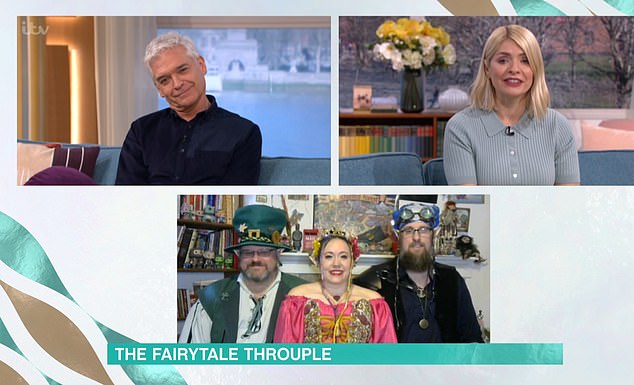 When it comes to sleeping arrangements, Lolly explained to hosts Holly Willoughby and Phillip Schofield (both pictured) that they each have separate bedrooms, but ‘make sure there is an even division of time’ 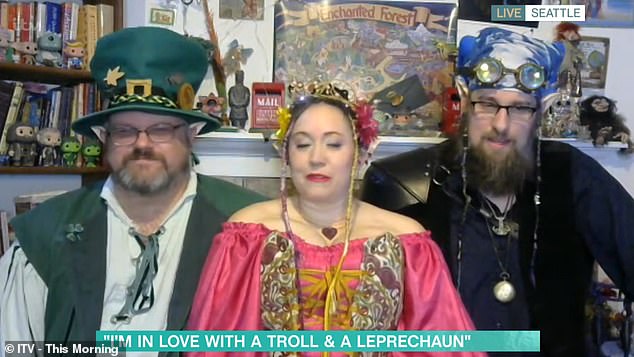 The relationship started when Lolly and Gunther met at one of her Fairy Blossom festivals, while Ion joined the relationship later. Pictured, together

She said: ‘We have enough bedrooms that everyone has their own bedroom and we typically make sure there is an even division of time – we do things together until it comes to bedtime.

‘We do our work throughout the day. Gunther and I work together on my business and Ion works at his secret job and then in the evening we all have a family dinner and then break out usually because I’m a workaholic, as a fairy.’

The trio recently contracted Covid after a visit to the dentist, and told that they’ve been feeling the ‘residual effects’ of the virus.

‘It was because of the tooth fairy we caught it’, said Lolly. ‘One of us had to go to the tooth fairy and that was where the Covid was contracted and spread to everybody in the household. The residual effects are real, we can all testify I think.’