WandaVision episodes 1-3 were made available for review. This is spoiler-free.

Fresh off the back of a Marvel-free year, the very first of the MCU’s brand new roster of television shows is on the cusp of being released into the world – but has it been worth the wait?

The short answer is: absolutely, yes.

Elizabeth Olsen’s Scarlet Witch (or Wanda) and Paul Bettany’s Vision are reunited, against the black and white backdrop of a picturesque suburban ’50s household. Drawing inspiration from classic sitcoms – the most obvious being a homage to the 1960’s magic of Bewitched – the series sees the pair navigating domestic life while trying to keep their powers under wraps from their fellow small-town folk.

The leading stars are captivating, and the transition to the small screen suits them. WandaVision is truly Olsen’s show and, away from the crowding of the Avengers movies, she’s finally got room to flex and breathe more breadth into her character. Bettany is also a joy to watch, and their on-screen chemistry serves as an anchor for the show, bringing a fond sense of familiarity to this whimsical new world.

The supporting cast can’t be overlooked either. Kathryn Hahn is, to use her own words, “a gas” as Wanda and Vision’s nosy neighbour Agnes, while the addition of Buffy the Vampire Slayer‘s Emma Caulfield Ford as the town’s social queen bee was a welcome and enjoyable surprise.

WandaVision is brilliantly written and gorgeous to look at. There are plenty of laughs to pepper the overarching mystery, which is nurtured by short, sharp bursts of colour to breakthrough the facade and remind us that, despite appearances, we’re still very much in the universe that we’ve come to know and love.

Any invested Marvel fans that are hoping for a swift injection of some action, may come away from the first few episodes slightly disappointed. But WandaVision has a charm that deserves to be fully embraced, and there is a lingering promise that there’s a whole lot more to be discovered – especially with the knowledge that characters and events will play directly into future movies. 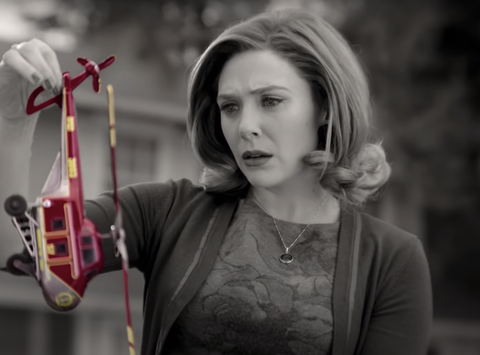 As is to be expected for a show that has sold itself on its connections to the wider MCU, the attention to detail is to be admired and there are plenty of easter eggs and comic book connections for fans to pick up on. We won’t mention too much here – because, spoilers – but in-keeping with WandaVision‘s ambiance, many are embedded in quirky old-style infomercials.

The feel and tone of the show is a bold choice, but one that absolutely pays off. With a seemingly endless list of Disney spin-offs and re-imaginings of existing franchises, WandaVision has set the bar sky-high, and shows that there can still be room for creative flair and original storytelling.

With that being said, if WandaVision is a sign of what we can hope to expect from the next phase of superhero stories – consider our interest well and truly piqued, all over again.

WandaVision will premiere on January 15, streaming on Disney+.